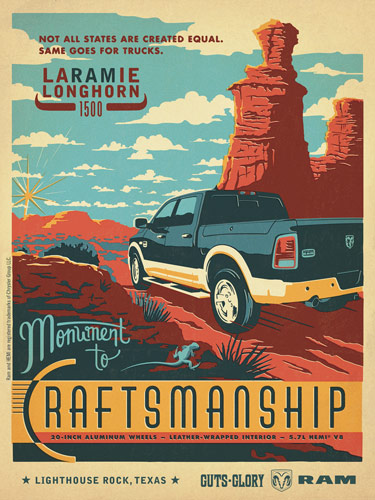 Ad for the Ram 1500 Laramie Longhorn by Anderson Design Group

We don't spend much time covering ad campaigns -- mostly because there are so many to review that if we did, we'd have no room to talk about anything else. But a new campaign for Ram trucks (formerly Dodge Ram) is so eye-catching, we just couldn't help ourselves.

The campaign itself is very small -- in fact, it's limited to one publication, much like the Chevrolet Volt ad that GM recently ran in one of Detroit's LGBT newspapers. Also like that ad, the four Ram spots are spectacularly well thought out.

According to Media Post, the ads appear in the Texas Parks and Wildlife Outdoor Annual Hunting and Fishing Regulations guide, which is currently being sent to over 3,000,000 outdoors enthusiasts in Texas. Two are full-page, and two are spreads, and all four hearken back to the Art Deco travel posters popular in the 1930s and 1940s.

Best of all? They're also being sold as prints. You can buy 24"x18" prints of the spreads for $30, or you can buy small, medium, or large prints of the single-page ads, which range from $14 to $300. Your best buy, though, might be the postcard set, which includes ten additional images from national parks across the country for just $13.

It's a little remarkable that Olivier Francois, head of Chrysler's marketing team, would spend so much time on such a seemingly small campaign -- but then again, advertising trucks to Texas outdoorsmen seems like a pretty good investment.

The credit for the pieces really goes to the highly talented Anderson Design Group, out of Nashville, Tennessee. If you interested, they've got a full range of travel posters and other goodies for shoppers (or anyone on your shopping list).