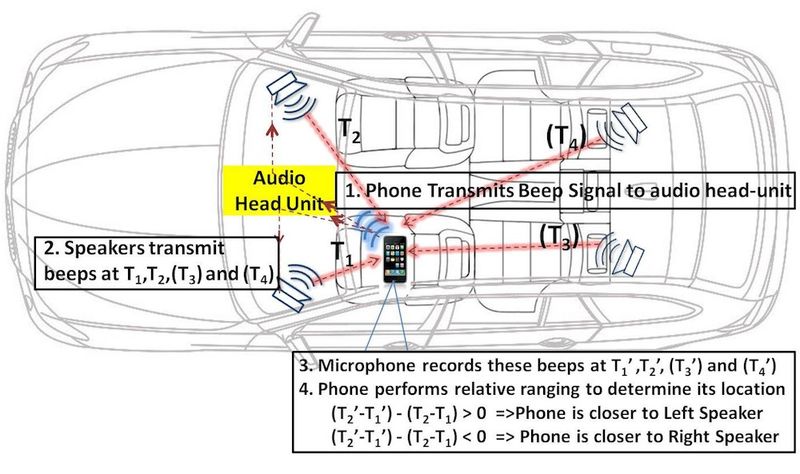 Anti-distracted-driving tech from Rutgers University & Stevens Institute of Technology. Illustration of the logical flow in the system. By measuring the amount of time that sound takes to travel from each speaker, the cell phone app can determine whether the phone is on the driver’s side or the passenger’s side of the car. Source: Yang et al.

We all know that using a cell phone behind the wheel is a bad idea. Texting is the worst offense, but even gabbing on a hands-free headset isn't perfect.

We've seen an array of apps to combat the problem of distracted driving, most of which rely on a phone's built-in accelerometer to determine when someone might be driving. But those apps have come with a number of problems.

For example, what if you're in the passenger's seat? You're moving at the same speed as the driver, obviously, so your distracted-driving app kicks in, preventing you from making calls or sending text messages, even though it's safe for you to do so. As a result, you have to figure out some way to disable or override the app without completely uninstalling it -- or engage your fellow travelers in conversation.

Now, Green Car Congress reports that a team of researchers from Rutgers University and Stevens Institute of Technology have dramatically improved the design of distracted-driving apps. They've developed a simple way for phones to tell where you are in the car and, if necessary, turn themselves off.

The system works by having the phone interact with the car's Bluetooth-enabled stereo. The phone sends out high-pitched beeps to each channel of the stereo. Those beeps are then routed back through the appropriate speakers: left, right, front, and back. Like a bat, the phone keeps track of how long it takes for each signal to return, pinpointing the phone's location in the car.

So, for example, if the phone determines that it's closest to the left front speaker, it's fairly sure that it belongs to the driver and kicks into safe mode. If it's anywhere else, you're free to use it to text your BFF Jill or Instagram your little heart out.

The good, the bad

On the whole, this seems like a very straightforward way to curb distracted driving, which was associated with nearly 3,100 deaths in 2010.

However, the technology isn't without its share of shortcomings:

1. It depends on a Bluetooth stereo system. Those are becoming more common nowadays, but we're far from 100% market penetration. Maybe the researchers could enhance the technology to work with phones that connect through an auxiliary jack?

2. Pinpointing the phone's location doesn't completely solve the problem. If you're one of those people who throws his belongings on the passenger's seat before hitting the road, then an app built on this technology could determine that you're sitting there, too. When your phone rang or a text alert sounded, you'd be able to grab your phone and communicate as usual, because the app would think it's okay.

3. The scientists aren't app-developers themselves. They carried out their work as a "proof of concept" experiment. Now they have to convince bona fide developers to incorporate the technology.

Does this technology seem useful to you? Would it curb your own distracted driving habits? If not, what would? Share your thoughts in the comments below.

Review update: 2021 Honda Odyssey does not abhor a vacuum
Commenting is closed for this article
Contribute
Send us a tip Comment Contact the editor
Follow Us