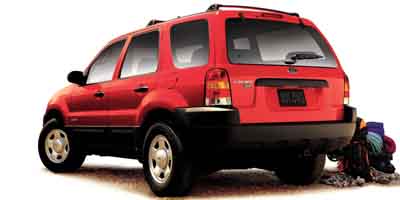 Earlier this month, we told you that the National Highway Traffic Safety administration had launched an investigation into reports of unintended acceleration in the 2002-2004 Ford Escape. Ford began conducting its own probe around the same time.

Apparently, Ford's preliminary findings were strong enough to warrant immediate action, because the company has now issued a recall for Ford Escape SUVs from the 2001 to 2004 model years. In all, some 423,634 vehicles are affected.

In 2005, Ford recalled about 470,000 Escape vehicles from the 2002-2004 model years. The recall was intended to repair a problem with the Escape's accelerator cable, which was, in some cases, snagging on the Escape's gas pedal. As a result, the Escape's throttle could occasionally stick, making it difficult to stop or slow the vehicle.

When company reps realized what could happen, Ford sent a memo to dealers explaining the problem and urging them to take extra care when conducting the recall repair. However, a watchdog group called the Center for Auto Safety says that Ford never told the 320,000 Escape owners who had their vehicles repaired under the recall that they might've exposed their SUVs to additional problems. And so, the Center for Auto Safety began pressuring NHTSA to launch a second recall.

The bulletin explains that the recall is linked to the aforementioned problem of the cruise control cable getting caught on the engine cover, thus leaving the throttle open. NHTSA points out that this is a hazard whether or not owners use the cruise control feature.

Ford will begin sending out notices of the recall around August 6. At that time, owners will be able to take their Escapes to a Ford dealer, who will repair them free of charge.

Ford will fix the problem by increasing the clearance between the engine cover and the cruise control cable. Unfortunately, the parts needed to carry out the repair probably won't be available until mid-August.

If the necessary parts aren't available when an owner drives in for the repair, the dealer will simply disconnect the cruise control cable as an interim remedy. Should that happen, the owner will need to make a second appointment to complete the repair.

Note: this recall is unrelated to the one recently issued for the 2013 Ford Escape.