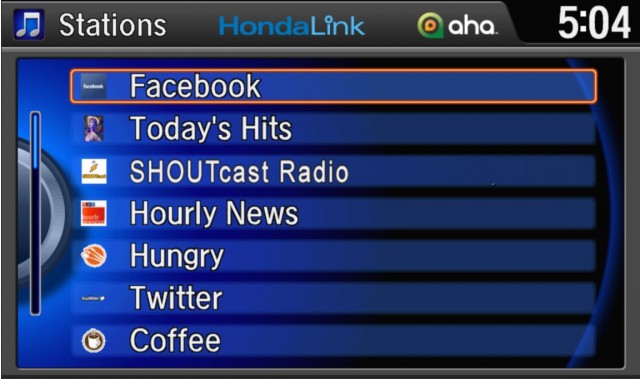 Honda has announced a new generation of infotainment systems that will make its debut first in the all-new 2013 Honda Accord and in the refreshed 2013 Honda Crosstour, both expected later this year.

And reflecting a simplified approach that we've seen increasingly in systems like Toyota's Entune or GM's MyLink and IntelliLink, Honda has kept screen-based displays and menus simple, while delegating impressive information and entertainment capability to tethered smartphones—the latter through the debut of a single interface from Harman's new Aha platform.

“Smartphones have become so integral to people's lives,” said Charles Koch, Honda Manager of New Business Development. “The challenge is to enable the benefits of these devices without contributing to visual or manual driver distraction.”

And the way Honda is approaching that issue is with cloud-based delivery. Powered through Aha, the new HondaLink system allows single-point access to streaming audio, for Slacker, as well as audio newsfeeds for Facebook and Twitter, or location-based feeds for Yelp. Aha also offers a longer cache (or buffer) for improved streaming in places where cellphone reception isn't ideal.

The system also rolls in the Pandora interface and voice-to-text SMS texting feature (Android and BlackBerry only), with pre-programmed responses, that were altogether introduced to the 2012 Honda CR-V.

Honda claims that the service will come at no additional incremental cost—other than potential data premiums, of course—and will make online radio services as easy to access as conventional AM/FM radio; yet through smartphone selections, it's highly customizable.

The Aha integration—the first yet in a new vehicle for this service—allows users to compile a preset list from tens of thousands of possibilities, with the app for iPhone and Android grouping content into categories. Users will first need to download a HondaLink app for their iPhone or Android handset. The system will include customizable settings for multiple users and handsets as well.

Honda boasts that since the service is cloud-based, and the interface is kept simple, there will be no weekly (or major) updates, and it's designed to be good for the life of the vehicle. Koch also notes that the system “reduces the visual burden to the driver.” Controls for the system will be through on-screen controls, steering-wheel switches, and voice controls—although Honda hasn't yet outlined the extent of the voice capability.

We've yet to see how the system will be incorporated with navigation features or how it will be packaged in the Accord. But as soon as we get some seat time in the 2013 Accord, you can expect full HondaLink impressions.