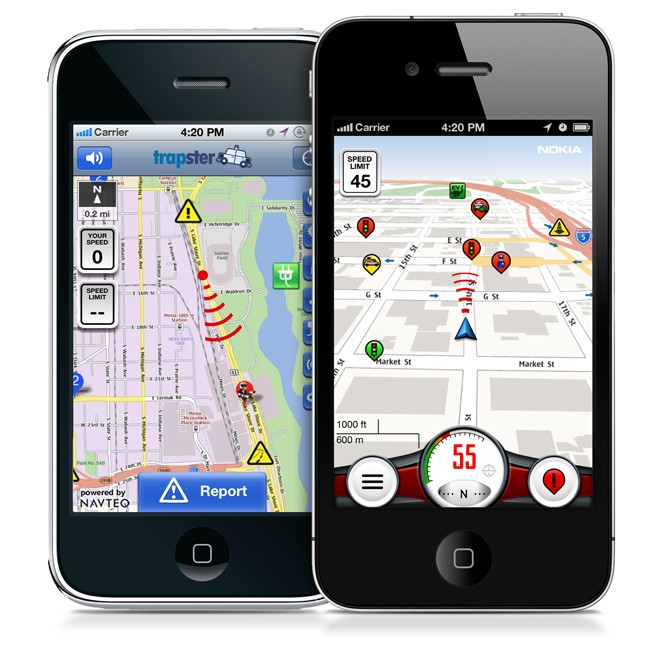 As smartphone apps go, we admit that Trapster isn't in our top-ten list. However, recent updates should make it a lot more user-friendly to Trapster's millions of fans.

Our beef with Trapster is that it's been uniquely targeted to lead-footed drivers and the law enforcement-averse. Unlike general navigation apps (e.g. Google Maps, TomTom, Waze, and so on), Trapster is really designed for users to share information about speed traps. As a result, Trapster has given minimal attention to functions like traffic and routing that we'd find useful in the course of everyday driving.

Which is fine. Developers are free to create any apps they like (well, mostly), and judging from the preponderance of fart apps on iTunes, there's obviously a market for everything.

Trapster is no exception to those rules: even though we don't find it especially useful, Trapster has been downloaded over 16 million times as of today.

The recently arrived 5.0 version of Trapster hasn't lost its laser-like focus on speed traps, but it has made using the app a lot simpler.

Perhaps the biggest improvement is seen on the home screen above. Instead of the old 2D map, Trapster now features a 3D vector map, which make it easier for drivers to see what's up ahead with a quick glance at their smartphones. As before, the app's GPS integration will alert you when you exceed the speed limit in a given area, but the new design makes this feature far more useful.

The other part of Trapster 5.0 that looks good is its nighttime mode. This dims the display by using a darker color scheme when the sun goes down. You can switch to nighttime mode manually, or you can set it to switch over automatically at 7pm.

Other updates include new trap icons (which we found hard to read while driving), and updated version of the "Nearby Traps" and "Trap Details" screens. For a complete rundown of changes, check out the Trapster blog.

As always, Trapster remains free for Android, Apple, Blackberry, and Windows users. Unfortunately, the 5.0 update is just for Apple owners at the moment. Android fans, sit tight: given your OS's booming market share, we expect to see a new version for you very soon.