Connect with our dealer and finance partners through our site and ask for details regarding their at-home car buying services.
OK
HomeNewsMarketing

Don't Love Your New Chevrolet? Return It Up To 2 Months Later 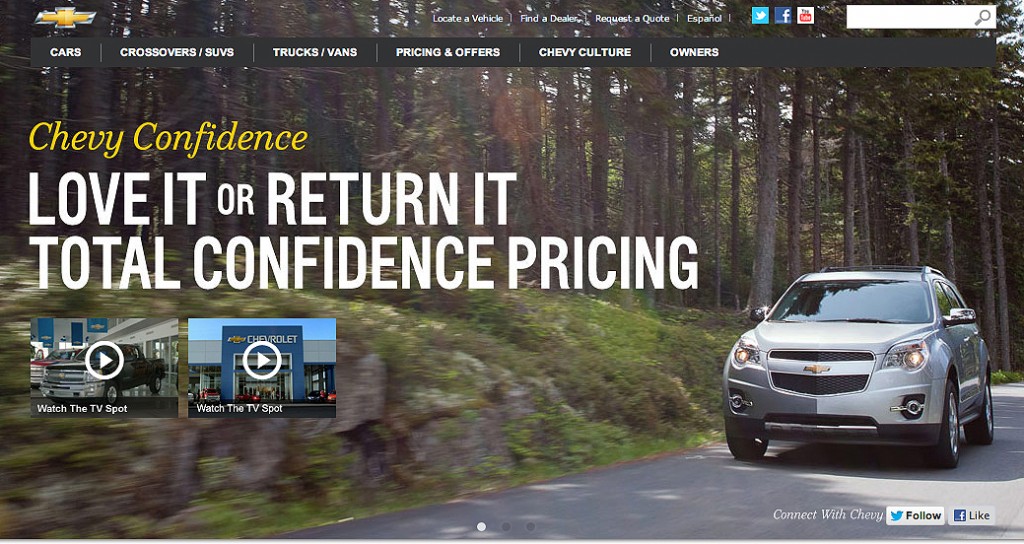 Having second thoughts about that new Chevrolet sitting in your driveway? Is your better half giving you heat for buying a Camaro as a "family car"? Well, don't fret, shopper: General Motors will let you return it, no questions asked.

According to a press release from GM, the new return policy is part of something that GM calls "Love It or Return It".

But before you rush down to your local dealership in your '82 Chevette, you should know that the "Love It or Return It" program comes with a few stipulations:

4. It has to be a purchased vehicle, not a lease.

Sound too good to be true? But wait, as the pitchmen say, there's more!

To many in the industry, these two programs may sound like crazy talk, but Chevy's global vice president of marketing, Chris Perry, sees things very differently: "Research has shown customers respond positively to the confidence companies demonstrate with programs like this and appreciate the peace of mind that comes with knowing they have the option of being able to return their vehicle."

Think back to the depths of the Great Recession. Remember the Hyundai Assurance plan (which is vaguely similar to "Love It or Return It")? That program did wonders for Hyundai's sales and boosted the company's profile among consumers.

What's more, in the end, very few Hyundai customers returned their vehicles, meaning that Hyundai got the benefit of looking like a good guy, without having to eat into profits. Chevy could see similar results.

The timing of these launches, however, could be a subject for debate.

On the one hand, you could argue that now is the perfect time for GM to debut these programs -- which are known collectively as "Chevy Confidence". After all, 2011 was Chevrolet's best year in history, so a program like this could maintain the brand's positive momentum.

On the other hand, the U.S. is in the midst of a presidential election. One candidate is closely associated with the GM/Chrysler bailout (even though his predecessor was the one who started the ball rolling), and the other is famous for saying that the U.S. should let Detroit go bankrupt (though he later took credit for Detroit's turnaround).

As a result, GM and its supersized sales figures could become talking points for both sides -- especially the company's critics.

But whatever: our hunch is that GM would probably take heat either way. So now's as good a time as any to launch these programs, we suppose.

Anyway, here's a commercial for the new "Love It or Return It" program. Have a look:

New-car shoppers: do these programs make you more likely to consider a Chevrolet? Why or why not? Drop us a line, or leave a note in the comments below.