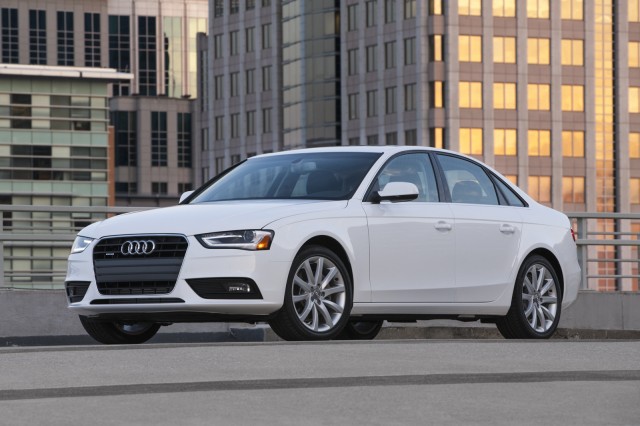 The A4 is Audi's powerhouse--not just because of its 333-horsepower S4 edition, but even more so, because of what it brings to the brand. Almost 50 percent of Audi's U.S. sales are its "B-segment" cars, including the A4, the S4, previous Avants and the new Allroad wagon.

Case in point: over the past 30 years, Audi AG's sold about 10 million cars from this family. It's kind of a big deal, to bowdlerize a Bidenism.

This year, faced with a brand-new BMW 3-Series sedan already on the road and brand-spanking-new 2013 Cadillac ATS about to upset the entire pecking order, Audi's given the A4 a mild makeover. From the outside it's more a touch-up, but under that skin, Audi's incorporated some of the best navigation interfaces into the A4's cabin while brushing up its handling with electric power steering.

It's also waved goodbye to the Avant wagon model. Given a choice between importing the latest Avant and the lifted, underguarded, and tall-roofed Allroad wagon, Audi of America chose the latter as a better tie-in with its popular Q5 crossover.

Audi flew us to Colorado, and shot the gap between raging forest fires in Boulder and Colorado Springs to deposit us in Bachelor Gulch, which wasn't particularly raining men despite the name. It was raining, though, and in between the downpours, we drilled away at mountain passes in an A4 quattro automatic. The fantastic Google Earth-driven navigation system led the way, and we cruised contentedly without Drive Select, the fiddly adjustable suspension that's given us fits in the hotted-up S4.

A mere 24 hours later, the A4 reminded us why people choose Audis over the traditional BMW or Benz--or maybe even over the ATS, a hugely successful shot at the bow of the 3-Series. Audi puts all its markers on high style and high tech; viewed through that lens, there's almost nothing quite like the A4, nothing quite as tasteful or as stunning to navigate. Cadillac's CUE has a striking, iPad-like interface--but only the Audi Connect system has Google's Street View maps rendering the real world while you're trying to hunt it down in real time.

Dynamically, the A4 isn't quite the equal of the Caddy or the BMW, or even the Infiniti G37, until you climb into lofty S4 territory. Even there, it's a tweener--faster than the standard-issue competition, ticks slower than the hottest V-Series and M cars.

The appeal lies entirely in its otherness. In that way, it's the Aston Martin of sport sedans--a conscious choice of aesthetics over objectives.

There's more to talk about. Take a look at this first drive video we shot in between the raindrops. When you're done, read our full review of the 2013 Audi A4 and S4--and don't forget to keep track of all the latest Audi news by following us on Facebook or on Twitter.