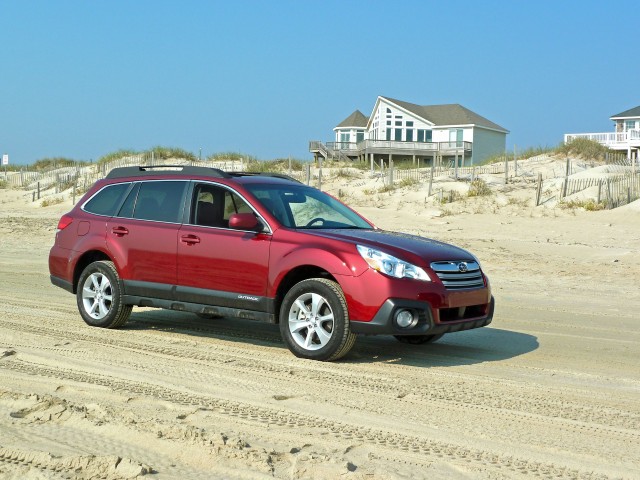 Having 20/13 eyesight is beyond the sharpness most of us can claim.  EyeSight driver assist in 2013 Subaru Outback and Legacy models is easier attained.  It’s available in an option package in 2.5i Limited and 3.6R Limited trim now, with planned integration into other models down the road.

After announcing its U.S. debut at the 2012 New York Auto Show, Subaru invited us to the Outer Banks of North Carolina to experience the system firsthand and get a taste of how Outback owners utilize their cars.  In other words, we didn’t drive to the mall or soccer practice.

Instead, between jaunts on four-wheel-drive-only beach routes, EyeSight impressed us with its myriad of safety functions on duty through a pair of cameras on either side of the rearview mirror.  Adaptive cruise control maintains a preset distance between the vehicle ahead, which came in handy following skittish drivers on the area’s heavily-policed roads.

The lane-departure feature is something we wish more vehicles had, since we don’t hold out much hope for drivers resisting urges to rubberneck, text or both.  In a way, it also promotes better lane-change behavior.  Our apparent habit of simultaneous signaling and merging produced visual and audible objections from EyeSight.  That can be avoided by first signaling, then changing lanes.  Only on narrow roads did we find it too nanny-ish, chiding us for wheels on apexes in corners (the system can be manually turned off when on- or off-road conditions dictate).

EyeSight is also capable of detecting things like animals--or considering we were in OBX, party animals--wandering into the Outback’s path and warning the driver.  It even employs pre-collision braking that can bring the car to a halt.  Subaru stresses it’s no substitute for good old-fashioned defensive driving, but is also confident it’s a big step to avoiding or at least minimizing crashes.

We agree.  While the staged demonstrations were informative and useful, the best example of EyeSight at work was when we least expected it.  Unbeknownst to us, a local landscaper we were following on the highway had no functioning signals or taillights.  As he braked hard for a quick turn, we suddenly noticed his license plate was held on with Phillips-head screws.  Closing in quickly.

In the split second we were interjecting, “Oh shucks!” (or something to that effect) and about to nail the pedal, EyeSight was already on the brakes and saving our bacon.  We’ve never been so thankful for truth in advertising.