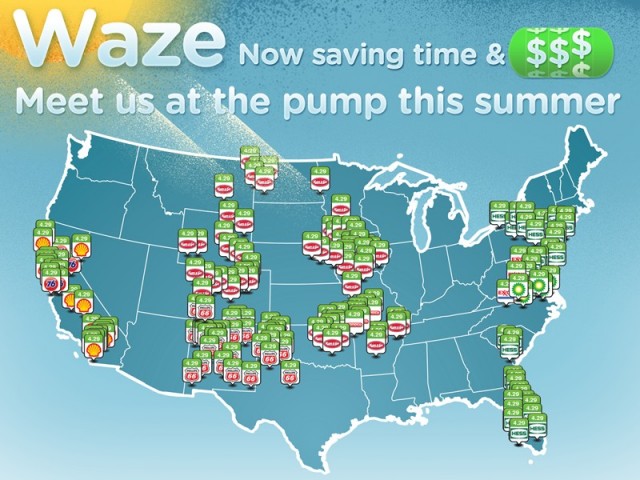 Of the many traffic apps available for Android and iOS devices, Waze is one of our favorite. The app's latest update -- which rolls out today -- offers a range of new features that should come in handy for summer travelers, including real-time gas prices.

Using the gas-price feature is pretty simple. Just select "Category" from Waze's main menu, and tap "Gas Station". Waze can tell you about gas prices in your general area, or if you prefer, it can stick to prices at stations along your chosen route. That way, if you're in unfamiliar territory or don't want to veer far off the path, you know how far you'll need to travel to get the cheapest gas.

What's more, like Foursquare, Facebook, and other geolocational apps, Waze has worked with gas stations to secure discounts for drivers. Savings of a few cents per gallon are highlighted on Waze's list of gas stations, and can be found at participating BP, Exxxon, Hess, and Shell outlets.

Waze's press release doesn't go into detail about how data on gas prices is obtained, but because the company is working with so many stations, we have to assume that pricing is initially provided by the retailers themselves. However, because Waze is all about user interaction (aka crowdsourcing), if you see a price that doesn't match up with the listing, you can change it right in the app.

Two other nifty elements of the Waze 3.2 update are:

As we said last week, Apple's recently announced updates to the iPhone will provide stiff competition for developers of travel apps. To keep ahead of the Cupertino crew, app-makers have to offer features that Apple can't -- or won't -- integrate.

The key to Waze's success has been crowdsourcing, and the app's new gas-price feature cements that position by offering even more opportunities for users to interact with one another. Given Apple's protective, tight rein on the iOS app environment, it's not likely to add crowdsourcing features anytime soon, which means Waze and its kin have a leg up -- for now.

For more details on the latest update to Waze, check out the video overview below. And if you're a Waze user, be sure to let us know your thoughts on the app in the comments section below.