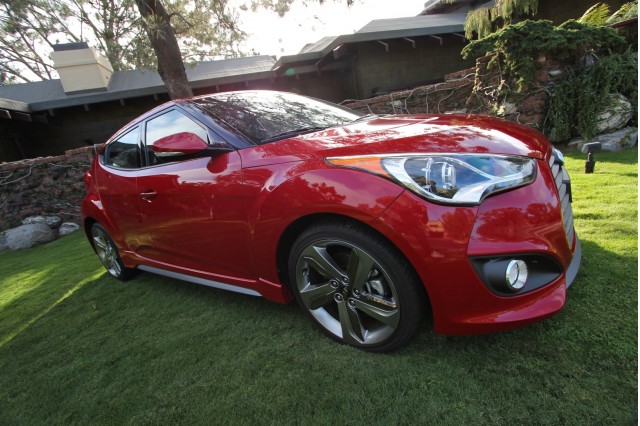 The 2013 Hyundai Veloster Turbo is spooling up for a summer sales launch, but before dealers and eager drivers get their hands on it, automotive journalists by the planeload are passing through the Lodge at Torrey Pines this week, rattling quietly fabulous La Jolla with the sound of forced induction and earnest discussions about the merits of red Piloti driving shoes versus the blue.

This regular migration is more predictable than the one undertaken by the swallows that swing through nearby Capistrano. If possible, it's one that requires more frequent car washes, too.

That's something to do with care, with the Veloster Turbo, in particular the matte-grey model.

With 201 horsepower from its 1.6-liter four-cylinder--63 hp more than the base car--the front-drive sports coupe promises to take up even more space in a crowded niche that already overlaps the territory of more muscular, sporty cars, everything from the brand-new Scion FR-S and Subaru BRZ, to the evergreen Mustang and Camaro, even to Hyundai's own Genesis Coupe.

As it's squeezed in alongside the Scion tC, VW GTI, Honda Civic Si, and others, the Veloster's become a reverse-halo car for the automaker. It's bringing new buyers to showrooms that it hopes will one day grow out of the hatchback, and into bigger, more practical Hyundais as their needs change. It's sitting on Hyundai lots for only 12 days on average--the U.S. marketing arm can't get enough Velosters to dealers. It's convincing 30 percent of its new owners to opt for the manual gearbox, in a day when automatics are grabbing more share than ever, thanks to improved fuel economy and sport-manual controls. 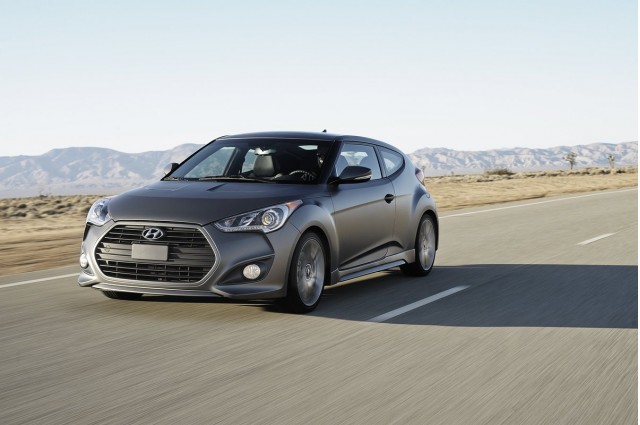 The Veloster's also offering Hyundai's first matte paint finish, complete with an owner care kit, priced at $1,000--and paired with the suggestion that only those who like hand-washing their cars should take on the maintenance of keeping the street look scratch-free.

By keeping packaging simple and bundling many features in as standard equipment, Hyundai's kept the Veloster Turbo price low, compared to its peers. It's $22,725, including destination charges, a $4,500 premium over the standard-issue car but with a host of add-ons. A sport suspension is standard; so are heated leather seats, LED headlight accents and LED taillamps, and 18-inch wheels.

The Veloster Turbo also sports BlueLink, Hyundai's infotainment system, with Pandora streaming audio via enabled mobile apps; iPod and USB connectivity; Bluetooth; voice controls; and a 450-watt Dimension audio system. A rearview camera is standard--displayed through its 7-inch LCD touchscreen--and parking sensors are included. A navigation system and a panoramic sunroof are options in an Ultimate Package. A six-speed automatic is an option too, for $1,000, but the base car's dual-clutch transmission isn't offered, since it can't handle the turbo's higher torque. With everything, including the automatic transmission, the Veloster Turbo tops out at $26,225.


The Veloster's turbo is the big change for the 2013 model year, but the base car gets some updates as well. Fuel economy is up to 40 mpg highway, the same as the manual-shift car. (Turbos are rated at 26/38 mpg with the manual, and 25/34 mpg with the automatic.)

One thing hasn't changed, and isn't likely to. That's the Veloster's unconventional four-door arrangement--one on the driver side, two on the passenger side, and a hatch in back. Though Hyundai sells a version with a conventional pair of driver-side doors in other markets, it's decided not to bring it to the U.S.


"We could do the five-door version at the blink of an eye," says product-planning VP Mike O'Brien, but for clarity's sake, he says the distinctive Veloster will only get four doors here in the States. For those who want five doors, O'Brien points to the coming 2013 Elantra GT, a fastback companion to the Elantra sedan and the two-door coupe, the latter also new for the 2013 model year.

We've driven the Veloster Turbo, and our first drive is on the way--but not until next week. Stay tuned to TheCarConnection and MotorAuthority for the word on the new hot hatch on June 27.

Until then, read more in our full review of the 2013 Hyundai Veloster and our Six-Month Road Test Veloster--and follow us on Facebook and Twitter, of course.