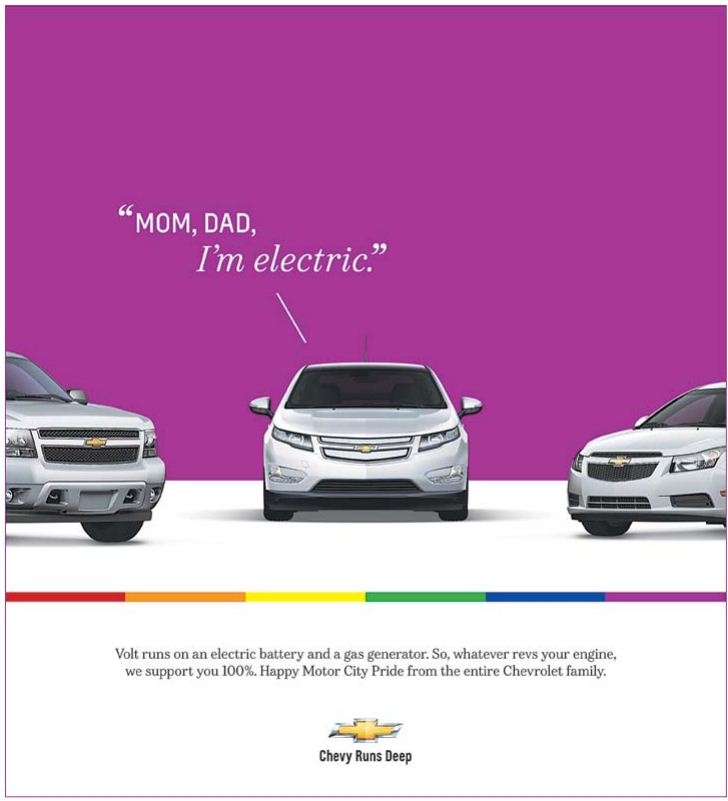 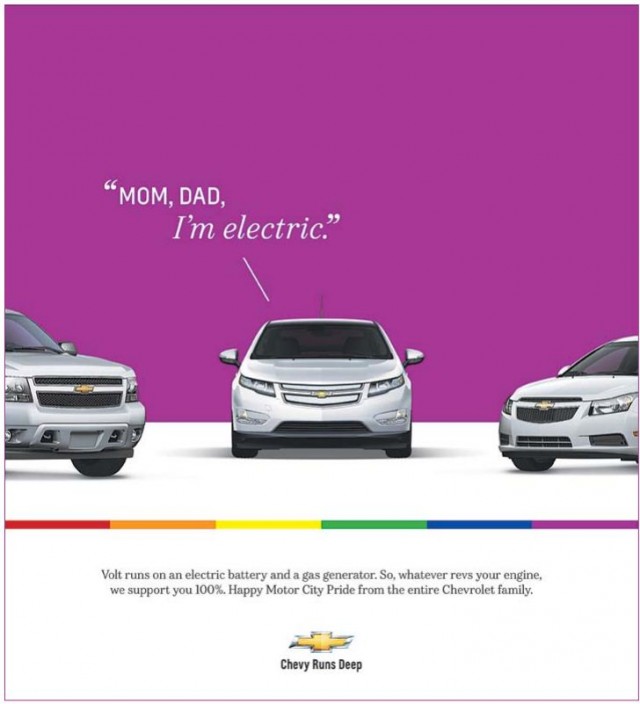 On June 28, 1969, gays, lesbians, and their transgendered friends took to the streets of New York, protesting the harassment they'd experienced at the hands of the city's police force. The violence -- now known as the Stonewall Riots -- lasted for several days and altered the way that Americans viewed their LGBT neighbors.

Forty-three years down the road, things have changed dramatically. We have an array of LGBT characters on TV and in movies. We have a president who's come out in favor of marriage equality. And with only a couple of exceptions, most of America's major corporations -- 86% to be exact -- have anti-discrimination HR policies to protect their lesbian and gay workers.

So, it shouldn't really come as a surprise when automakers sign on as sponsors of city-wide LGBT pride events, as Chevrolet did this past weekend for Motor City Pride in Detroit. In fact, it was Chevy's second year on the sponsor board, and it was joined by Ford, Chrysler, and the UAW.

No, what comes as a surprise is that Chevrolet would put so much thought into the advertising they do around such events. Case in point: the above piece for the Chevy Volt, which ran in Between the Lines, a Detroit-based LGBT newspaper.

Typically, LGBT advertising is little more than subbing out same-sex couples for their straight counterparts. But this spot -- Chevy's first ad targeted specifically at LGBT consumers -- took a little more effort, and its message is strategic:

1. For starters, Chevrolet knows that LGBT consumers tend to be early adopters. Given the Chevy Volt's advanced-tech credentials, it makes sense that the company would try to raise awareness in LGBT markets.

2. Also, recent studies have shown that LGBT shoppers are significantly more eco-friendly than the rest of the population. A big part of the Volt's cachet is its eco-friendly factor, so it's smart for Chevy to put the Volt in front of a predominantly sympathetic audience.

3. But perhaps most importantly, Chevrolet has managed to find an interesting parallel between one of its "outsider" products and a population that, in some ways, still resides on the margins of society. That's not just clever, but it makes for good advertising. After all, few demographics enjoy feeling as if they're being pandered to. This ad strikes an interesting balance between flat-out niche marketing and brand-alignment.

This ad began making the rounds late yesterday, and it's already causing quite a stir. Some are calling it ridiculous and immoral; others think it should be part of a national ad campaign.

What about you? Do you find it effective? Short-sighted? Or does it leave you saying "meh"? Drop us a line, or leave a note in the comments below.