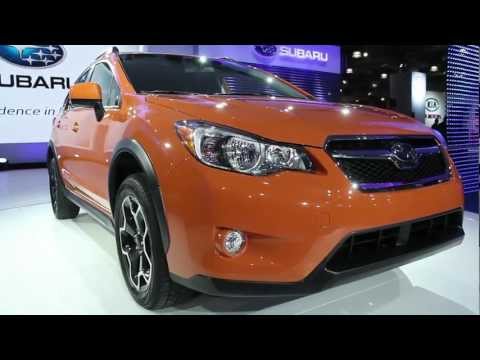 In one light, the new 2013 Subaru XV Crosstrek is little more than a lightly tweaked Impreza compact hatchback.

But looked at another way, the new XV Crosstrek is the feisty little Japanese carmaker doing what it does best: taking advantage of its all-wheel drive and U.S. drivers' desire for upright, crossover vehicles to create a new entry in a growing category.

Aside from the all-wheel drive subcompact Nissan Juke, which offers little more ground clearance than the standard Juke, and the aging, low-volume Suzuki SX4 liftback, there are precious few all-wheel drive compact hatchbacks out there--and most are made by Subaru itself.

But in 1995, Subaru added bigger wheels and some special trim to a Legacy wagon to create the Outback--the car that led Subaru's sales growth in the U.S. and is still its best-known vehicle.

The 2013 Crosstrek--a new model name making its first appearance--applies that same formula to produce a car that looks surprisingly different from its Impreza half-sibling.

Subaru started by adding larger 17-inch wheels and all-season tires to an Impreza with notably higher ground clearance, 8.7 inches rather than the standard 5.9 inches.

To accommodate the car's different driving dynamics, the XV Crosstrek comes with bigger front disk brakes. It also has a larger 15.9-gallon fuel tank, an increase of 10 percent over the Impreza's 14.5 gallons.

All 2013 Subaru XV Crosstreks are powered by the same 148-horsepower, 2.0-liter flat-four engine as in the Impreza, paired either to a five-speed manual gearbox or Subaru's LInearTronic continuously variable transmission (CVT).

Those ratings are lower than the 27 city, 36 highway, and 30 mpg combined ratings of the Impreza with CVT, but the XV Crosstrek is higher, heavier, and probably a bit less aerodynamic.

Other than that, the specifications for the XV Crosstrek are largely similar to those of the Impreza hatchback. With the 60/46 split folding rear seat back down, it has 52.4 cubic feet of load space--plus whatever can be carried on the roof, of course.

In addition to a rolling cargo cover that can be removed, Subaru owners will recognize the waterproof tray, the tie-down loops, and the grocery-bag hooks in the load bay.

And the interior is largely unchanged.

There's no base model of the 2013 XV Crosstrek; it's offered in Premium and Limited trim levels.

The Premium model comes standard with a tiling and telescoping steering wheel that includes audio and phone pairing controls; power locks, windows, and mirrors; a security system; a multifunction display in the instrument cluster that shows outside temperature and gas mileage data; and carpeted floormats.

The Limited model comes with the CVT standard, and adds automatic climate control; leather interior trim; a rear-seat armrest; and a 4.3-inch display audio system that includes images from a rear-vision camera as well as HD radio.

A power moonroof and a navigation system with a 6.1-inch touchscreen are optional on both trim levels.

Premium buyers can also order the All-Weather package that includes heated front seats, exterior mirrors and a wiper de-icer. Those features are standard on the XV Crosstrek Limited.

Pricing for the 2013 Subaru XV Crosstrek hasn't been released yet, but it should be available at Subaru dealers sometime this summer.