2013 Cadillac XTS: Is CUE The Best Touch-Screen Interface Yet? 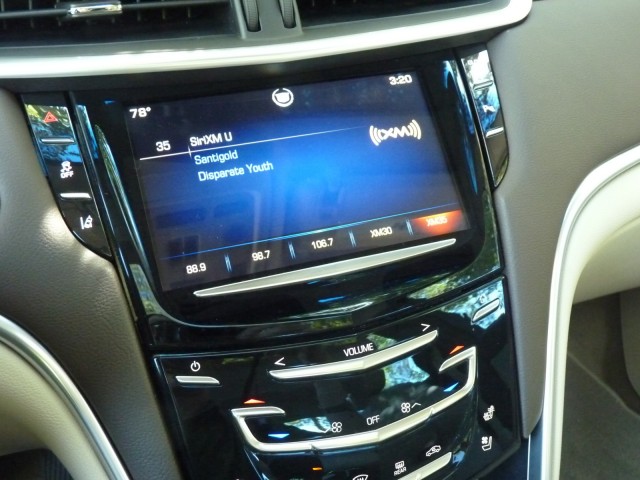 If you've owned a luxury car in recent years, you're familiar with the idea of a screen-based interface as a control hub for connectivity, navigation, and entertainment. But these systems—like MyLincoln Touch (Lincoln), iDrive (BMW), COMAND (Mercedes-Benz), MMI (Audi), or Remote Touch (Lexus)—are often a far cry, in ease of use, from the interfaces we have on our smartphones and tablets.

Finally in the 2013 Cadillac XTS that reaches dealerships in a few weeks (and on the way in the 2013 Cadillac ATS later this year) there's a system called CUE (the Cadillac User Experience), which has some of the functionality we're used to from those personal devices. According to GM, it has the first fully capacitive touch screen—much like the one in the iPad—in an original-equipment car system; the first gestural and proximity sensing in a car-based interface; and the first build-in haptic feedback in any screen-based system.

CUE can do a number of things that only a few other systems can at this point, like read text messages to the driver or send pre-formatted text replies. And it utilizes a next-generation version of voice-recognition software from Nuance, installed and processed onboard rather than relying on a network/data connection.

Although by now we've received several demos and previews of what CUE will be like—and we've already seen that it's one of the best-looking interfaces yet—we were faced with the question of how, really, will CUE actually work in the car, while you're driving?

Natural language works—most of the time

Thankfully, we can report no major hangups, or distractions. And even more importantly, we had a far more pleasant and productive experience with CUE's voice recognition system than with the systems in any other new cars. Over the nearly ten different voice tasks that we tried to do—mostly audio- or navigation-related—CUE understood our natural-language command and simply did it.

The voice recognition mostly did exactly what we told it. It's the newest voice processing from Nuance, and it’s again a big step better than what’s in current-generation vehicles. Additionally, the XTS's exceptionally quiet interior and its standard active noise cancellation play a role in functionality here. That said, it's still far from perfect. For instance, a query to take us to ‘Griffith Park’ brought the suggestion of ‘Crispers’ over and over again (when you say 'no,' why won't it remove that possibility from the query list?). Eventually we got there by asking for the adjacent Griffith Observatory instead.

From behind the driver's seat, while focusing on driving, we found CUE's abbreviated, reconfigurable gauge panel to be very useful in avoiding distraction. You can choose from several primary gauge layouts, placing whatever information is particularly important to you, and then it's all within easy sight and controllable via steering-wheel toggle buttons.

Favorites are your friends

One of the highlights of CUE—and it proved just as useful in real-life use—is the ‘favorites’ bar at the bottom of the screen, which lets you set bookmarks essentially for common tasks, customized for you. For instance, you can set favorite radio stations, media folders, or locations—or even contacts—and it’s smart enough to find the nearest Starbucks if you bookmark ‘Starbucks,’ for instance. But it's smart enough to distinguish the difference if you bookmark a specific Starbucks.

Kudos also to the drag-and-drop functionality of CUE, as well as its simple pinch-and-stretch functionality for zooming. And those favorites are arranged in 'pages' down at the bottom, which scroll like the pages of app icons in a smartphone or tablet.

But a few of the same issues that we have with MyFord Touch are issues here as well. One of them is that you can't change either the typeface or the font size (an official involved in the project suggested that the legal department put the kibosh on that); and despite the screaming-fast (by today's standards) processor, there's still some latency from the time you make a selection until something happens on the screen. With most selections, there's a quick buzz back to your finger (the haptic feedback), but it would be more satisfying if the feedback could come instantly.

Do apps slow the system?

We like how all of CUE's built-in menus seem to come with either a 'back' or 'exit' button, but one disappointment is that there appeared to be no obvious way (and no way that Cadillac officials were aware of) to force-close an application. And gaining access to resources—or always prioritizing, say, navigation responsiveness over Pandora seamlessness—seems crucial.

For instance, CUE ships with an app for Pandora streaming audio, and while we tried to get this to work over Bluetooth streaming audio at first (as it does in some vehicles), we were then told that you need to use the USB connection. However until CUE timed out in trying to establish the Bluetooth audio connection we couldn't use the app, and everything else was clearly running a little bit slower. Also, when the system was first indexing the contents of my iPhone, we did notice greater lagginess.

The system definitely comes with enough processing power—a triple-core ARM 11 chipset, which is intended to stay with the vehicle, and the system, through a life of firmware and software upgrades—as well as the potential enabling of greater gestural recognition in a few years. Heat management between the cores of the ARM processor is a key to longevity, Cadillac CUE Program Manager Jeff Massimilla told us; so intensive tasks are smartly divvied up.

CUE operates on Debian Linux, which we knew, but we were still surprised to see instructions on how to download the system's source toolkit built into CUE's core menu system. Unlike other automakers, who look to first establish partnerships with app developers, GM is forging ahead into a brave new world—and it may very well end up with the coolest apps.

While this is a good first taste of how CUE works while actually driving, we can't yet call it the best in-car interface, but we like what we see. We hope to bring you a more extensive assessment in the next few months; in the meantime see our First Drive of the 2013 Cadillac XTS, as well as our full review, for more information.

General Motors provided accommodation, as well as some food and travel expenses, to High Gear Media in order to facilitate this report.