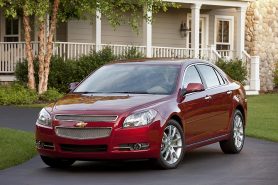 According to a bulletin from the National Highway Safety Administration, the recall stems from a problem with the software that controls the sensing and diagnostic module, or SDM. The SDM controls a variety of things on the Malibu, including how and when airbags and safety restraints are deployed.

NHTSA says that "After an event of hard braking, the sensing and diagnostic module...may reset itself", which could cause problems with the Malibu's safety system. For example, if you're forced to brake and turn aggressively to avoid an accident and the SDM resets, then sees a potential for rollover, it may trigger the roof rail airbag before the rollover has been confirmed.

More worryingly, in some cases a resetting of the SDM could actually prevent it from deploying airbags or activating seatbelt pretensioners in the event of a crash.

Given the severity of this problem, GM is fast-tracking the Malibu recall. The company says that owners should receive official notice of the recall around June 1. At that time, they'll be able to take their Malibu to a Chevrolet dealer, who will reprogram the SDM, free of charge.