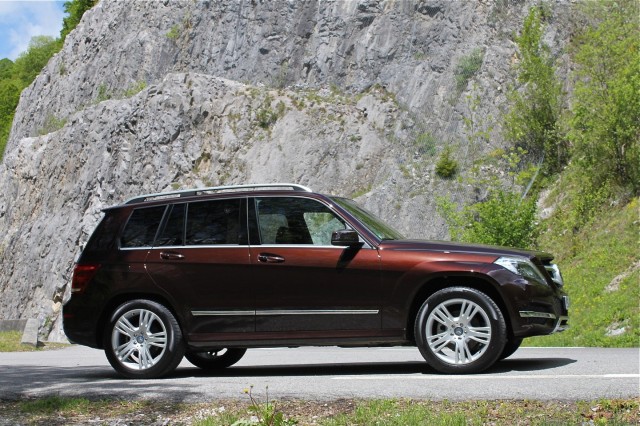 It's an unusual day--or maybe a coming of age--when our editors look forward so eagerly to a new diesel-powered vehicle.

The Benz GLK is too young to be old-school, and yet, that's where we find it, just three years after it was introduced for the 2010 model year. In a day of soft-silhouetted crossovers, the GLK's angular sheetmetal doesn't grab with the same velvet hooks as the trendy Q5 or the fashion-forward Range Rover Evoque. Even though its road manners are as good as it gets, the shape makes the GLK retro Pepsi Throwback in a Monster world.

In that distinction is opportunity: it looks more like a real sport-utility than anything else this side of a Land Rover LR2, and while the rest of the crossover world is caught with its pants down when it comes to fuel-efficient drivetrains, the GLK's getting the first truly green option in the segment, a turbodiesel that's a natural complement to an SUV of any size, but especially of this size.

When it finally lands in U.S. showrooms next year, the turbodiesel GLK will create some interesting confusion in the marketplace. Mercedes execs told TheCarConnection last week at the press launch of the GLK 250 BlueTEC and GLK 350 (the 302-hp update of the existing gas-powered ute) that while the diesel model will be all-wheel-drive only, it may also be one of the less expensive models in the lineup. The usual diesel price premium could evaporate since this one's a four-cylinder, compared to the six-cylinder in other GLKs.

Will Americans respond to a frugal powertrain when it's priced just right? We know how we'd respond after a day of driving solo through the French Alps. The diesel makes common sense, torquey whenever it needs to be, with noise and vibration of the usual kind--but no more objectionable than the direct-injection V-6's now-louder growl. It's about a second and a half slower to 60 mph for those who really care--but the diesel doesn't feel any less composed on paved roads, where it can be paddle-shifted and prodded to a brisk pace that substitutes just fine for the V-6's snappy responses. There's still no off-road package offered in America on the GLK, but there is mbrace2, a connectivity suite that helps track down the nearest Pottery Barn and a place to get a nice salad afterward. Yep, sounds right on target.

There's more change in this year's GLK, most of it subtle. The front end's more like the C-Class, and an AMG styling kit adds LED running lights. The cockpit's recovered from its plasticky past, with softly padded surfaces the norm and a little more artfulness injected into the arc of the dash. Some features have been demoted from the standard-equipment list--and final pricing and fuel economy numbers won't be confirmed until the GLK 350 arrives in showrooms in August.

For the diesel, it's more of a wait, with sales expected to begin in the first quarter of 2013. When it does go on sale, we think the GLK 250 BlueTEC will change the dynamic in the luxury-crossover segment. And maybe that will clear up some of the mixed messages the GLK sends about itself.