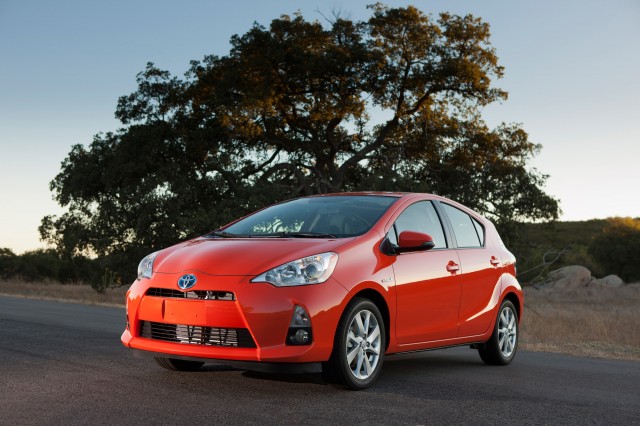 Now shoppers considering the lightest, smallest Prius—and the one with an astounding, best-in-class 53-mpg city rating—the 2012 Toyota Prius C, can have a little more peace of mind. The Insurance Institute for Highway Safety (IIHS) has named this five-door subcompact hatchback a Top Safety Pick for 2012—with top 'good' results in each of the major crash-test categories.

The Prius C earns top 'good' ratings in all areas of testing except for the 'structure/safety cage' area of the side impact test and the 'head/neck' region of the frontal offset test—indicating that the force loads were a little higher in some respects yet still excellent in most measurements. It also manages an impressive 5.28 times its weight in the IIHS roof strength test—relating to a lower chance of head injury in a rollover crash.

As of yet, the Prius C hasn't been rated by the federal government. But in federal NCAP tests, other Toyota Prius family have a good record, with the 2012 Prius earning a five-star overall rating.

After a couple of drives of the Prius C, we like what we see—especially considering the bargain $19,710 base price of the 2012 model. You're already unlikely to find one for that price; and now that the Prius C is looking like an especially safe pick as well, we bet the Prius C will continue being a hot item among frugal and green shoppers for the foreseeable future.

For more information, see our full review of the 2012 Toyota Prius C, or here to see the complete list of 2012 IIHS Top Safety Picks.