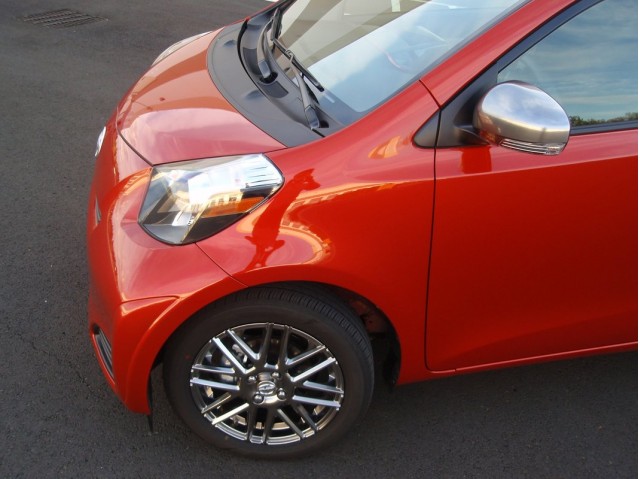 In our first drive of the 2012 Scion iQ, last summer, we were pleasantly surprised—almost smitten—with this new minicar (sold as a Toyota in other world markets), and impressed that such a daring product is coming to the U.S.

Compared to the Smart Fortwo, which is really the only other vehicle in the U.S. that's close to the same size, the iQ is a blast to drive—a conclusion we agree with in full after a follow-up. But after our second drive with the iQ, in what we would call real-world conditions, pragmatism has taken its toll and we're not nearly as thrilled with this so-called supermini.

Why? Especially with a fringe product like the iQ, context is everything. And with a car like the iQ, whether you like it or whether it feels sorely out of place and unnecessarily small depends on where you are—and who you are. Turns out, that first drive, which had us almost exclusively driving in small city streets in San Francisco, with a quick jaunt to the Marin headlands, probably painted a rosier picture than you'll have in most parts of the U.S.—even most American urban centers—as in a relative sense the iQ feels every bit as small as it is.

At about 120 inches long, the iQ is one of the smallest (other than the Fortwo) cars on the market, and the short, stubby profile looks almost toylike parked at an American parallel-parking spot—with several feet ahead and behind it. We can make sense of it in Manhattan or maybe San Francisco, where you need to shoehorn vehicles into sub-normal spaces, but unlike in some other markets, you can't typically double-park in the U.S., and there aren't otherwise compact-only spots small enough to truly take advantage of the iQ's diminutive size.

Does the highest-mileage non-hybrid deliver?

What does the iQ have going for it? Besides being compact and boldly styled (we still very much like the way it's designed and its unusual 3+1 layout), it gets great mileage, at an EPA-rated 36 mpg city, 37 highway. That 36-mpg city figure, by the way, is the best of any non-hybrid on the market.

But as we found—and covered in greater detail in this post—the iQ's real-world mileage wasn't what we expected. In 'normal' driving, running mostly city and suburban errands, we saw around 32 mpg.

That's not great mileage. of course. And they're close to the numbers we've seen in a wide range of new subcompacts like the Hyundai Accent, Kia Rio, Honda Fit, and even the new Toyota Yaris we drove a few months ago.

What you do get in the iQ is a surprisingly enjoyable driving experience, with excellent handling and responsiveness. Because you're pretty much sitting over the rear wheels, you have the odd sensation that the front and rear wheels are always taking exactly the same line, and there's a certain precision to how you can place it within your lane, or around corners. The iQ seems as if it might be tipsy, but it's confidence inspiring with its low center of mass, good grip, and great suspension tuning—good steering, too. There's none of the high-speed nervousness of the Fortwo; though you can feel crosswinds, we'd be fine cruising in the iQ for a few hours.

And then the shortcomings mount...

On the other hand, the iQ's short wheelbase invites all sorts of pitching and bobbing, especially on the highway; and as we noted, engine noise graduates from thrummy to ever-present at around 65 mph.

We think that Scion bringing over the iQ only with the continuously variable automatic transmission (CVT) is a mistake. The CVT isn't the worst we've driven—and it's worlds better than the clumsy automated box in the Fortwo—but it completely saps the sporting potential from this supermini and doesn't set the right attitude for Scion. Regardless of whether the shift lever is in D or S, this unit takes surprisingly long to let the revs ramp up; and then it doesn't stay nailed to redline but rather ratchets down toward 5,000 rpm in a few steps—as if it's halfheartedly trying to mimic a slushbox automatic.

The 2012 Scion iQ we tested totaled $17,529—including optional rear speakers, a storage package, a PioneerPremium HD Radio system (iPod ready), and an interior lighting kit, along with a few other small items. The sound system proved a bright spot; we found it easy to pair a phone, talk hands-free, and even take advantage of the Pandora integration, flawlessly, with song info on a bright, clear display screen.

How can this make better sense?

But coming back that price, it's actually about $400 more than the well-equipped Yaris SE Liftback we tested earlier this year—a car that was nearly as fuel-efficient (actually more so when we drove it very gently) and has room for up to five. You can fit three adults in the iQ, as we did for a short time, but even then you're giving up most of the cargo space. And for just a little more money, you could also have a 53-mpg Toyota Prius C.

As we see it, the real reason why Americans will be willing to settle for a vehicle as small as the iQ is for exceptional gas mileage, for special carpool-lane or parking privileges (or severe garage limitations), or for an especially cheap price. Sadly, the iQ has none of this, and put into the American context, we have no need for this.

Between the Smart Fortwo and the Scion iQ, we'd pick the Scion without the slightest bit of hesitation. That said, we just need something else to consider the iQ a smart choice.