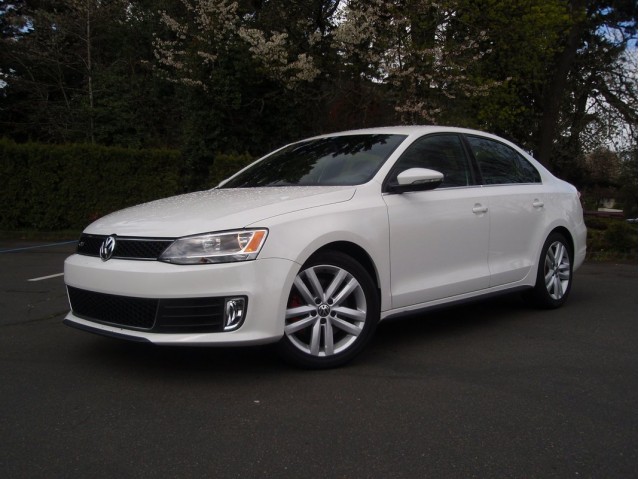 If you want a new Jetta sedan, skip the thirsty, coarse five-cylinder base engine. Heck, we're even tempted to tell you to go ahead and skip what's long been our favorite, the turbo-diesel TDI. That's because for about the same price as the TDI you can have what feels like a much more sophisticated car in just about every way.

The Jetta GLI is the one you want. In addition to stepping up to Volkswagen's excellent turbocharged 2.0-liter four-cylinder, you get a true (lowered) independent rear suspension, revised spring and damper settings, various chassis improvements and component upgrades, and a much-improved interior, with more soft-touch materials and better trims. And in all, it adds up to a much more sophisticated-feeling car.

As that intro hints, the Jetta GLI is a car where context is everything. Yes, the GLI is no longer the sharp enthusiast choice that it was when it closely paralleled the Golf GTI—and you now have to turn to the Golf R, which we recently drove, for hints of that former attitude—but it is a more capable performer without giving up ride comfort.

The total price of our 2012 Volkswagen GLI—essentially a base GLI with no options other than DSG—was $25,615, including destination, which is about the same as a 2012 Jetta TDI with an appearance option or two. And the TDI doesn't include any of those suspension or interior upgrades.

Appearance-wise, the Jetta GLI gets a black honeycomb grille and a deeper front spoiler that helps give the look a little more seriousness from the front; in back, taillamps are smoked, and there are dual exhaust tips, while red brake calipers are visible from the side. Plus, big 17-inch alloy wheels are included, while larger 18-inch designs are available. And inside, somewhat better-bolstered sport seats with bright red stitching—plus other red stitching throughout, and aluminum pedals—all help establish the sportier look and feel.

We simply love the combination of VW's excellent 2.0T engine (making 200 hp and 207 pound-feet here) and the DSG dual-clutch automatic transmission. It's just as responsive and torquey as we've experienced in other VW products; and the lack of a pause between shifts helps completely eliminate the idea of turbo boost. As we recently observed in a post regarding differences between the new EcoShift DCT gearbox in our Six Month Road Test Hyundai Veloster and the DSG here in the GLI, VW's DSG gearbox not only shifts faster but also responds better to our right foot, with the transmission knocking off very quick upshifts or downshifts when needed—or when called out by the shift paddles.

There's also a lot to like in the thrum from the engine; there's a somewhat off-beat resonance about it, making it sound a bit like a Subaru boxer engine when pressed—or a bit like the Audi TT RS's turbo five. It's a very efficient engine, too; we beat the EPA highway rating of 32 mpg in a 60-mile highway round trip (with 34 indicated from a 65-70-mph cruise), and averaged 24 mpg in a week and 230 miles of total driving, including plenty of short trips and city stop-and-go.

Despite the retuned suspension, the GLI is a little softer than we expected. Push the GLI hard on a curvy road—like one of our favorite stretches of test tarmac, with a choppy surface, and slow, tight esses—and the front end can cower a bit while the rear tires grip confidently and seem almost impossible to fluster. What's more, the electronic stability control comes on very quickly to slow us down—seemingly before we could use all the grip available in front, at times—and we see no way to disable it. That aspect alone confirms that the GLI is no longer the hard-edged enthusiast choice.

The attitude of a sporty sedan, not a sport sedan

All that said, drive quick but not crazy-fast, and the Jetta GLI has the right attitude for a sporty sedan but not a sport sedan, with a secure yet nimble feel. The quick-ratio electric-boosted steering is about the best we've felt in a compact sedan—easy to maneuver around tight parking spaces, nicely weighted, and capable of giving some feedback from the road surface.

In all, some of the same things we like about the standard 2012 Volkswagen Jetta, we also like here. With near-perfect ride quality, the Jetta beats most of the compact-sedan competition; seats are supportive in front, and there's enough headroom and legroom for taller adults in back; and there's plenty of trunk space.

So recalibrate your expectations about GLI, and if you're considering any standard Jetta, take the GLI for a drive before you commit. Sport sedan, definitely not. Sporty sedan, indeed.