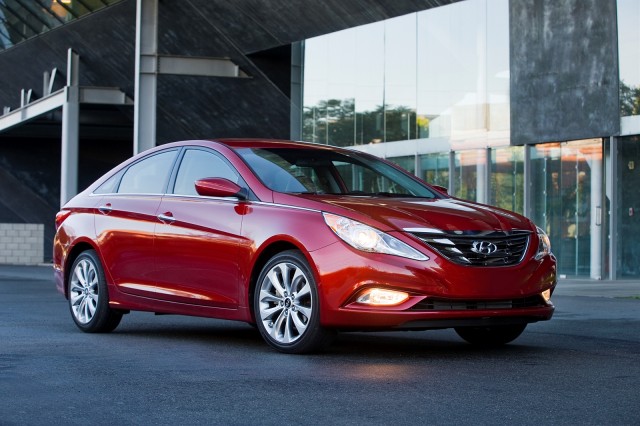 Full details are out for the 2013 Hyundai Sonata, and while it's offering improved equipment for the new model year, the manual gearbox has been been thrown out of the mix completely.

The Sonata is only the latest in a trend that we've been seeing now for many years. Mid-size sedans used to offer frugal base models—and even in some cases, better-equipped performance versions—with a manual gearbox, but as a manual-shifting shopper, your options in this category are increasingly limited. Last year, the redesigned 2012 Toyota Camry dropped the manual gearbox altogether; and at least from preliminary specs, it appears that Ford has also decided to drop a manual option from its all-new 2013 Fusion.

That leaves just a few mid-size sedans—the Honda Accord, Mazda Mazda6, Subaru Legacy, and Volkswagen Passat—that still offer a manual (in 2012). The closely related Kia Optima also does for 2012, although its final spec hasn't yet been announced for 2013.

It might not necessarily be the direction the market is headed. Just last week we reported that even though fewer models are offering manual gearboxes today, more people are buying vehicles with them than in recent years. And cost might have something to do with it.

On the other hand, we've been told repeatedly by product planners that a very small subset of shoppers of sensible mainstream models are only interested in manuals from the standpoint of frugality—and that base, manual-transmission models tend to be negatives for resale/residual value. Counter-intuitively, there tends to be a much larger subset of premium sport sedan shoppers that gravitate toward manual gearboxes, and there it doesn't detract significantly from resale value at all.

The residual (and resale) value authority ALG has indeed given the 2013 Sonata an improved (and best-in-class) residual-value rating of 60 percent. While to some it's just a figure, this rating indicates to lenders and leasing companies roughly what it will be worth in three years—which is an extremely impressive number for a vehicle entering the third year of its life cycle.

As we outline in our full review, the 2013 Hyundai Sonata gets a few more standard features, with fog lamps and heated front seats added to the GLS—all for $21,670, which Hyundai points out is lower than that of the Toyota Camry LE or Honda Accord LX Premium. Hyundai also notes that the GLS offers heated mirrors, heated front seats, and XM satellite radio are all features that neither the Honda nor the Toyota includes at that level.