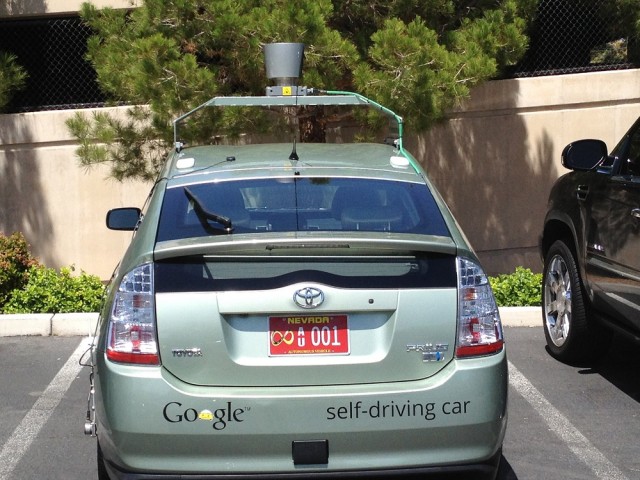 Google's self-driving car is now 100% street-legal -- at least in Nevada.

Last summer, Nevada passed legislation making it the first state in the U.S. to allow self-driving cars on the roadways. Back in February, a governmental committee announced rules and regulations related to those vehicles. According to PCWorld, to pass inspection, autonomous cars need to have logged at least 10,000 miles, and host companies must post a surety bond of at least $1 million. That bond allows companies to have up to five self-driving vehicles in their fleets.

We'd heard that autonomous cars would receive red license plates to set them apart from the pack. Now Reuters reports that one car -- a Toyota Prius specially tricked out by Google's Sebastian Thrun -- has received just such a plate from Nevada's Department of Motor Vehicles. (That's it above, with the "AU" marking -- presumably shorthand for "AUTONOMOUS" -- and the coveted number "001".)

There's no word on where Google's car will spend most of its time, though the report indicates that DMV officials spent time assessing the car in environments as diverse as state highways and the crowded Las Vegas strip. Frankly, we'd be surprised if Google didn't take this opportunity to keep the car in high-density areas to show off its cutting-edge technology.

As a reminder, Google has set a goal of traveling 1,000,000 miles in its autonomous vehicles. To date, it's gone about 200,000 of those miles, with just a couple of fender-benders (and at least one of those happened while a human was in control of the vehicle).

The Nevada DMV says that this kind of autonomous vehicle is the "car of the future". It's already received license applications from other companies with self-driving cars, and though the state's licenses are currently limited to corporations, the DMV plans to award them to individual owners down the line.

But the question remains: will you buy an autonomous car yourself?

2021 Volkswagen ID.4 electric crossover SUV has 250-mile range, starts at $41,190
Comments (0)
Commenting is closed for this article
Contribute
Send us a tip Comment Contact the editor
Follow Us