Would You Want Hello Kitty On Your Car--Forever? 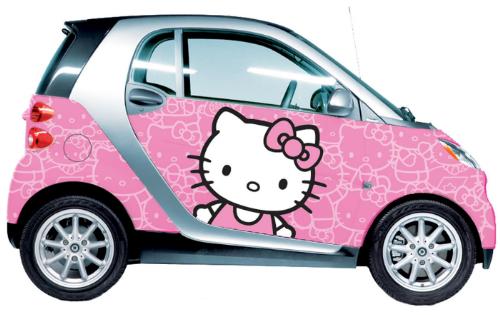 The tribal tattoos and tramp stamps that were no-brainer decisions in college proved just that for some bearers in the years since.  Will mass personalization on new cars leave fewer scars of regret?  Could it hurt resale value?  Some Toyota owners may find out.

As explained on Boston.com, the automaker has developed an advanced metal-stamping technique capable of producing sharper lines in body panels.  An upcoming limited-edition of the iQ (known in North America as the 2012 Scion iQ) will mark the debut of the process.

Journalists allowed rare access (though sadly, no photography) in this section of the Motomachi factory in Japan were shown samples of doors, demonstrating the minute detailing made possible by this process.

They were “stamped with Toyota President Akio Toyoda’s autograph, as well as cartoon creatures,” the article reports.  Made-to-order paintwork and panel stampings are future options the manufacturer wants to offer consumers, though it stopped short of confirming when you could have Hello Kitty on your Camry.

Bespoke appointment isn’t a new concept.  Bentley and Rolls-Royce have famously offered it to their clientele for decades.  Custom bodywork predates that even further.  Personalized stamping on panels is altogether different.  And if you think Toyota has bigger fish to fry at the moment, Toyoda himself would agree.

Rebuilding its reputation for quality is a given, but the company also aims for more distinctive design while improving efficiency and flexibility on the assembly line.  That way, when regulations change or demand varies, the factory can respond in less time.

Toyota showing how intricate body panels can be stamped could be more an example of what’s possible than what’s to come.  But since the automaker hasn’t taken the custom-order idea off the table, you can still hope to spec a really boss flame job and the raised contours of Pikachu on your Prius.