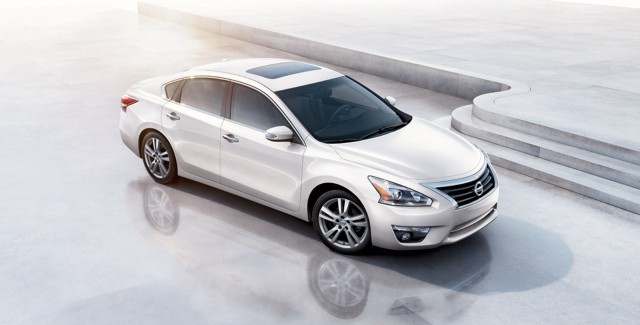 The new 2013 Nissan Altima made its debut at the 2012 New York Auto Show, but it won't arrive at dealerships until July. If you'd rather get your Altima ready for delivery now, however, you can, with Nissan's Altima pre-order site.

Starting at $21,500, the 2013 Altima comes in four basic trim lines and offers a choice between two engines. The base model, only available with the 2.5-liter four-cylinder engine, is the low-price leader at $21,500. Moving up to the 2.5 S, the price rises $1,000 and brings with it a higher level of standard equipment, including automatic headlights, six-way power driver's seat, an upgraded stereo, cruise control, and more.

The next steps up the range to the Altima Sedan 2.5 SV ($24,100) and 2.5 SL ($28,050), make more extensive upgrades in equipment, with the SL getting standard leather upholster touches, an eight-way power lumbar driver's seat, a nine-speaker Bose audio system, power side-mirrors, power moonroof, and more.

For those that crave more power, the Altima Sedan 3.5 S is the gateway into the 270-horsepower 3.5-liter V-6 range, starting at $25,360. Like the four-cylinder models, equipment climbs as you move up the range to the 3.5 SV ($27,780), and 3.5 SL ($30,080), with most of the same features. Choosing the SL trim in either four- or six-cylinder forms opens the option to get some high-tech driver aids, like lane-departure warning, blind-spot warning, and moving-object detection.

If you'd like to build and price a 2013 Altima Sedan to your own specification, head over to the official site, but don't forget to stop by our early review of the 2013 Altima to get an idea of what's available.