Google Wants To Work With Automakers On Self-Driving Cars 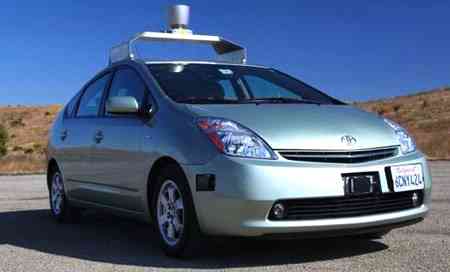 Like a scene straight from the movie I, Robot, self-driving cars are quickly becoming a reality. Google wants to see autonomous cars on the roadways, but doesn't want to build the cars themselves. It's been approaching automakers in an effort to find a company to build the cars with its help.

Google currently has been testing a fleet of ten Toyota Prius hybrids, which have been retrofitted with the equipment necessary to make them self-driving cars. So far more than 250,000 trouble-free miles have been logged on the fleet. But Google says it wants to log at least one million miles before it offers the technology to consumers.

While Google isn't interested in building the cars, it is currently in talks with major automakers in an effort to find a partnership. An automaker could build the self-driving cars, and Google would provide the data and technology to ensure they are fully autonomous.

Google's driver-less car project manager Anthony Levandowski told the Detroit News, "automakers understand it is happening and they want to play a role in that.'

The idea behind autonomous cars is both to increase safety and decrease congestion on the roadways. Google notes that 90 percent of all car crashes are due to human error.

If put into production, Google would have the ability to deactivate the self-driving systems remotely if an issue arose. There are also still liability concerns as to who is at fault if a crash happens, or how insurance will work. Google is currently analyzing all of this and talking with insurance companies.

According to Google, the goal isn't to eliminate human driving, but rather to make it safer.

Other companies such as Audi and Cadillac are also working on self-driving vehicles. Cadillac's Super Cruise feature could be out as soon as the middle of this decade. And some states have already made self-driving cars legal.

So we ask you: How do you feel about self-driving cars? Is Google on to something, or do you not want to live in a world where you aren't in control? Let us know your thoughts in the comments below.