Obesity Costs America $4 Billion Per Year At The Pump 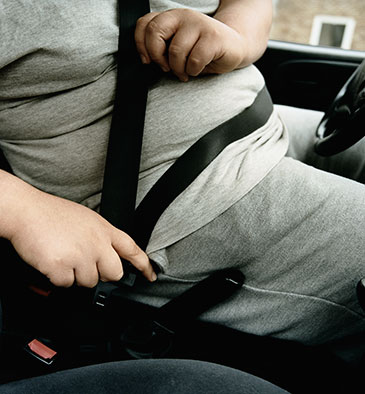 Now is the time when many Americans look up from their laptops and start thinking seriously about summer vacations.

Now is also the time when many of us look down and realize that the laps on which those laptops sit aren't as flat as they used to be. We've picked up a few pounds over the winter -- pounds that become increasingly harder to shed as we get older.

But weight gain isn't just a problem for folks trying to squeeze into last year's swimsuits; it's also a problem for those of us trying to cope with today's high gas prices. According to an article at MSN, America's increasing obesity rate has led to a huge increase in fuel consumption. All told, those extra pounds lead up to $4 billion in extra gasoline costs.

How is that possible?

Some would say that the link between obesity and gasoline isn't rocket science, but in fact, it is.

It costs around $1,000 to put one kilogram of material into orbit. So, to put two kilograms into orbit, it costs $2,000. Double the weight means double the cost. Most of that expense is fuel.

The same holds true in our cars. All things being equal, it takes roughly twice as much energy to move 200 pounds as it does 100 pounds. More weight equals more fuel consumption.

(That said, even though our waistlines have expanded, our gasoline usage hasn't fully doubled. To do that, we'd have to double the weight of the passengers and the car, meaning that if an average car weighs around 4,000 pounds, we'd have to weigh 4,000 pounds ourselves. Thankfully, we're not there yet.)

How much is this costing us? According to Sheldon Jacobson at the University of Illinois, obesity forces America to use a whopping 938 million gallons of gas more than we would if we were a leaner, meaner nation. Which means that many of those super-sized gains in fuel efficiency we've seen in recent years are, to a degree, canceled out by all those delicious tuna melts we've been scarfing down.

Heck, it's so bad that the National Highway Traffic Safety Administration has had to beef up the child-size dummies used in crash tests to account for America's larger kids.

But wait, it gets worse.

We're not the only ones gaining weight. Our cars are doing it, too.

Obviously, American cars have to be bigger to accommodate our bigger bodies. But even when we were slimmer, Americans liked larger rides. Unlike our counterparts in Europe, we've got plenty of elbow room in the U.S., and we like to use it. Bigger cars typically mean weightier cars, and weightier cars eat up fuel efficiency.

And lets not forget all the things we prefer in our rides nowadays, like infotainment systems, heads-up displays, and powerful engines. Plus, we travel with a raft of safety gizmos like airbags, rearview cameras, and their ilk. All of that stuff weighs us down. In fact our colleagues at Green Car Reports recently looked at two Hondas made 30 years apart and found that the model from the 1980s was actually more fuel efficient than its present-day counterpart.

Just to be clear, we're not pointing fingers at the American public. Several of your dedicated writers -- this one included -- could stand to lose a pound or 20. (Okay, make it 30.)

Nor are we implying that it's only a problem in America. True, we're at the vanguard of the obesity problem because we have loads of land for growing crops and livestock, a vast network for fast- and processed-food distribution, and a relatively affluent population to enjoy that food.

But other parts of the world are catching up. In Europe, Asia, and elsewhere, obesity is a growing problem. It's going to be something that we all have to account for in healthcare, industrial design, and, of course, in transportation.

We don't have a nice, easy solution to the problem. If you do, by all means, feel free to weigh in below.