Autonomous Cars Are Coming: Will You Buy One? 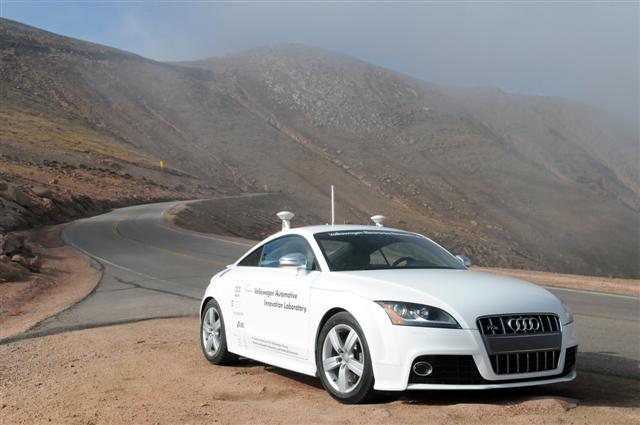 Well, maybe not yet. But autonomous cars are coming. And like electric powertrains and rising ocean levels, there's little we can do to stop it.

Not that all of us would. In its 2012 U.S. Automotive Emerging Technologies Study, research firm J.D. Power talked to over 17,400 vehicle owners about upcoming car tech. And do you know how many of them expressed interest in self-driving cars? 37%. For those keeping score at home, that's over 1/3 of respondents.

Of course, that figure slipped to 20% after folks heard the price: an estimated $3,000 on top of MSRP. But still, one in five is nothing to sneeze at.

Not surprisingly, interest is strongest among men age 18 - 37  (i.e. younger, more tech-friendly consumers). It was also especially high -- 31% --  among owners of premium vehicles, perhaps because they've already had a taste of parking-assist and other technology often available on luxury rides. But even among non-premium owners, interest still clocked in at a respectable 18%.

Most people who want autonomous features want them for "boring" driving tasks -- commutes and long, interstate road trips. However, they also expressed interest in retaining the ability to drive themselves for pleasure and in dangerous situations.

Detractors of autonomous tech complain that it takes the fun out of driving. Many also point out that truly autonomous car tech is still years from hitting the road, thanks to legal and technical difficulties.

And in a way, those people are right: fully autonomous cars are still years, if not decades away. Google might soon have some on the road in California and Nevada, and other automakers like Audi will continue to test automated-driving features, but most of us shouldn't expect to find self-driving cars in our garages for another decade (or more).

However, we will begin seeing many autonomous elements -- and we'll see them very soon. The parallel-parking-assist feature is found on many luxury rides now, and it's not going away. Lane-assist alerts and other safety devices are also becoming increasingly common on both premium and mass-market vehicles.

And let's not forget vehicle-to-vehicle (V2V) technology, which is being tested in multiple markets by the Department of Transportation, Ford Motor Company, and others. V2V is crucial to the development of autonomous cars, and in theory, it's fairly simple to roll-out. After all, much of it is done by on-board computers, which almost all new cars have. Throw in a dedicated short-range communications chip, and you can keep track of traffic all around you (so long as those other cars have V2V tech, too).

V2V in itself isn't autonomous-car technology, but it provides the basic underpinnings. It puts cars on a smart grid to keep traffic moving and minimize accidents by as much as 81%. Without it, autonomous cars are just a bunch of radar-enhanced vehicles, operating in their own little bubbles. That's okay -- it's how Google's prototype works -- but it's not nearly as efficient as having a network of cars talking to one another.

And yet, technology probably isn't the biggest hurdle standing between us and this brave new world of self-driving cars. It's America's system of laws.

The topic of autonomous cars may not be as emotionally charged as that of, say, same-sex marriage, but it involves a far greater reworking of legal principles. For example, if cars can be both autonomously and manually driven, are there different sets of rules depending on who's driving? If the car's driving itself, who's at fault in an accident? And that's just the tip of the iceberg.

Of course, like any rules, laws are made to be broken and changed. Google and others have worked to make autonomous cars street-legal in parts of the country, and now they're in talks to find out how much it'll cost to insure autonomous vehicles. Their progress will determine how fast autonomous cars drive themselves into America's showrooms.