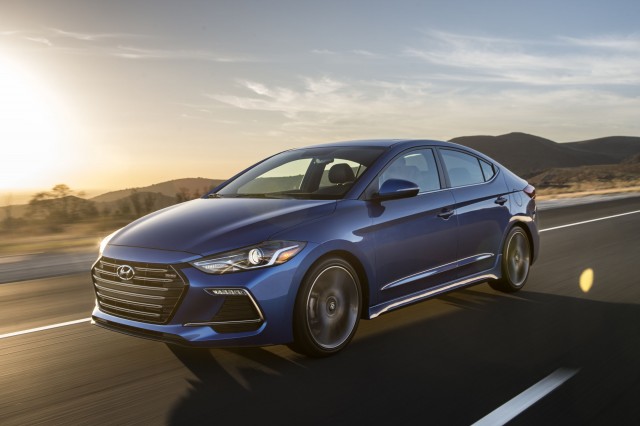 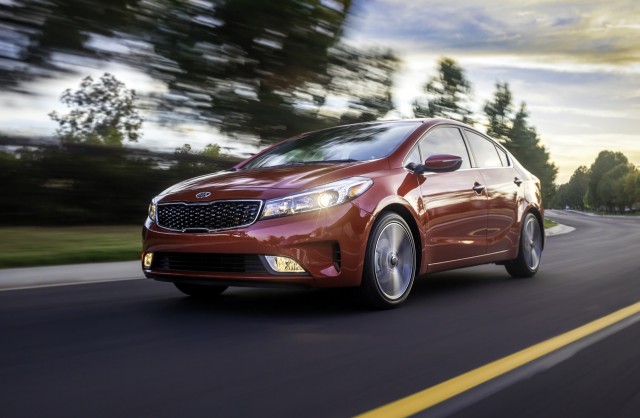 The Hyundai Elantra and Kia Forte are two compact sedans with common roots, but some very striking differences in styling and interior comfort.

One of them is the better choice, at least for now. But which one is better for you?

While the Elantra also comes as a five-door GT, and the Forte has both a five-door hatchback and as a two-door Koup as well as the sedan, we're focusing here on the 2017 Elantra and Forte 4-door models.

We rated the Elantra at 6.7 out of 10, against 5.8 for the Forte, based on superior scores for the Elantra in performance, as well as in comfort and quality. That said, in some ways the two cars are more similar than you might think, as they're built on fundamentally the same underpinnings. (Read more about how we rate cars this year.)

No doubt, it's the Hyundai Elantra that first turned heads back in 2011 when it was given a dynamic new look. In its latest form, that shape has been toned down and smoothed out. We still like its stance and details, but it's less interesting than it once was.

The Forte's last redesign saw it grow a little to almost exactly the same proportions, but to an altogether more European-influenced effect. Its crisp details and gently arched roofline are inspired reinterpretations of classic compact-car profiles, with Kia's corporate face carving out its own identity. While both cars are handsomely drawn, to our eyes, the Forte—which this year gets an updated front end with a smoother, "tiger nose" grille and swept-back headlights—is the more attractive of the pair by a slight margin.

Inside, the Elantra has given up its fashion-forward design for a very traditional, horizontal dash trimmed in more ordinary black plastics. The Forte takes a more simplified design direction that's refreshing and easy to navigate. Overall, we rate the cars equally, but the Forte's shapes have held up well while the Elantra has ceded its styling edge. 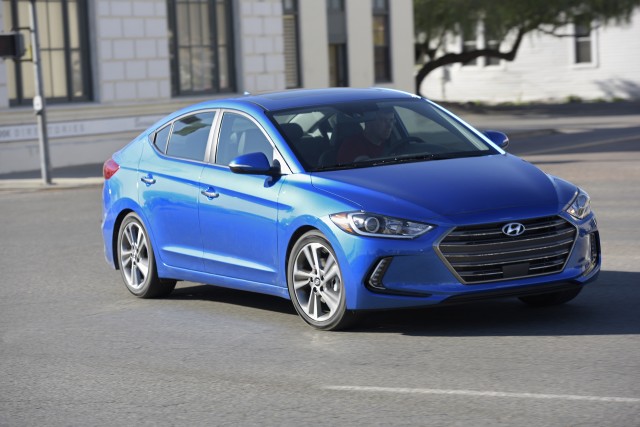 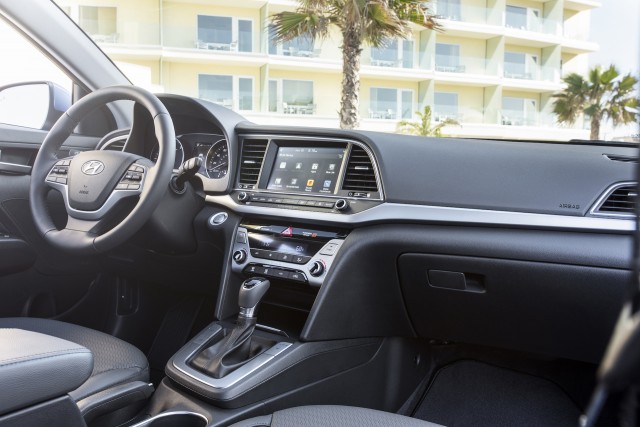 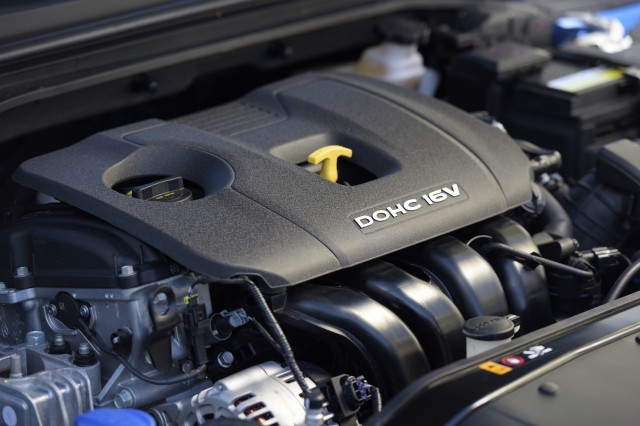 On the performance front, both cars get updated drivetrains for 2017. The base Forte now offers a 147-horsepower, 2.0-liter inline-4, with an option for a different 2.0-liter inline-4 with 173 horsepower. The new Elantra sports the same 147-hp 2.0-liter inline-4, or on an Eco model, a 1.6-liter turbo inline-4 with 128 hp. Neither will have enthusiasts dropping GTI brochures in the dust, but they're adequately smooth and efficient. The Elantra holds a slight advantage in fuel economy numbers; top Elantras earn up to 35 mpg EPA combined, but the Forte's best effort is 32 mpg combined.

The Elantra has pulled ahead in dynamic behavior and road feel. Its body has been beefed up with stronger steel and adhesives, which translates into a stiff body. That in turn let engineers tune its ride for more compliance, while its steering has a better sense of true. The Elantra also offers an optional driving mode selector, which tailors steering, throttle, and shifting to the driver's taste.

What this adds up to in these cousins comes down to subtleties. If you drive them back-to-back, as we've done, you'll notice the Forte tucks more spry handling into its hardware. It has a more dynamic feel, and its electric power steering is a step ahead of the Elantra's setup, and it doesn't much affect the Forte's ride. But the Elantra now has a very quiet ride and smooth demeanor, though the Forte isn't far behind. 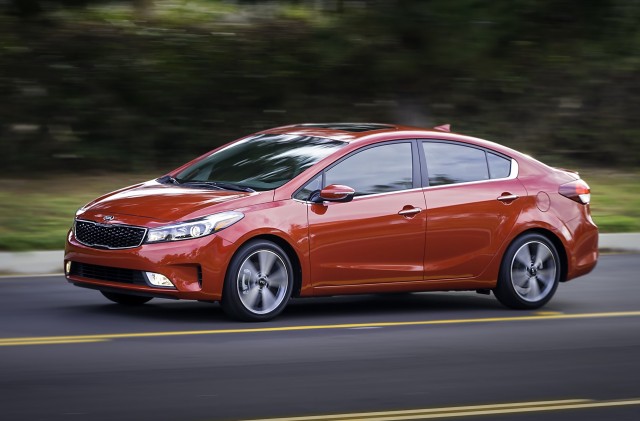 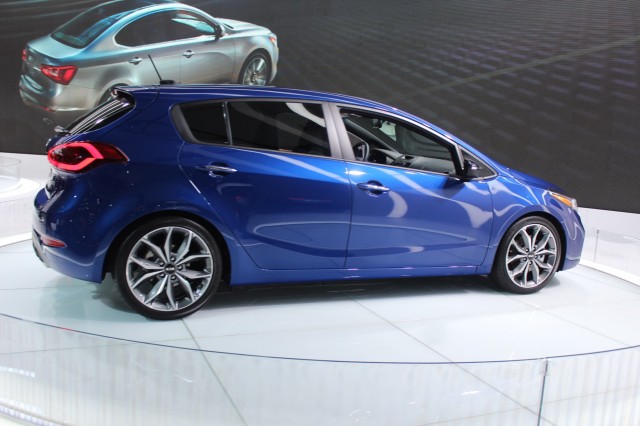 As for interior room, the cars now ride on identical wheelbases and have almost exactly the same interior dimensions, though the Elantra's leg room is biased toward the front seat, the Forte's more evenly split. Neither has great rear-seat head room, but both are acceptable for adults.

In the past, safety ratings for the Forte and Elantra have been quite different. The Elantra earned top scores, while last year's Forte got a "marginal" IIHS score for small-overlap impacts. Thus far, the IIHS hasn't yet rated the updated Forte, whose NHTSA ratings are unchanged. The new Elantra has suffered with some poor results in the NHTSA test cycle, but is an IIHS Top Safety Pick+. It's also one of the few vehicles in its class to offer a suite of advanced safety features, everything from adaptive cruise control to forward-collision warnings with automatic braking.

On the features list, both the Forte and Elantra have standard power features, cruise control, and air conditioning. Hyundai's options list includes ventilated front seats, heated rear seats, push-button start, and a navigation system and infotainment system with one of the largest screens among compact cars. It also supports Bluetooth audio streaming, and the nav system includes voice controls and XM Data services.

Forte shoppers can now get all those features, with a twist: the UVO infotainment controller is a new, superior, smartphone-driven system that uses cell data to get mapping information and to stream audio.

6.8
Expert Rating
We miss the brash, buzzy looks, for sure—but the 2017 Hyundai Elantra is now one of the most refined economy cars on the road.
6.5
Expert Rating
The Kia Forte looks more handsome and finely detailed for 2017, as well as even better-equipped for the money, although its tight packaging and lackluster safety scores will likely remain concerns.

6.0
Expert Rating
Performance by usual yardsticks is just average, but the 2017 Hyundai Elantra's one of the most composed small cars we've driven.
Read More
5.0
Expert Rating
The 2017 Kia Forte offers unremarkable performance and handling; it's the opposite of sporty, despite the addition of a new "S" model this year.
Read More

8.0
Expert Rating
Fuel economy is very good, if not class-leading, in the 2017 Hyundai Elantra.
Read More
8.0
Expert Rating
One model of the 2017 Kia Forte sedan gets a 32-mpg combined rating, but this isn't among the more fuel-efficient compact sedans.
Read More

Front Wheel Drive Read Full Specs
Front Wheel Drive Read Full Specs
Compare Free Dealer Price Quote
With competitive price quotes from multiple dealers, you will be prepared when you meet your local car dealer. Please tell us how to contact you so that dealers can compete for your business!
2017 Hyundai Elantra
There are no Hyundai dealers in our network that are located near the ZIP code.
2017 Kia Forte
There are no Kia dealers in our network that are located near the ZIP code.
Thank you!
We have sent your request for price quotes on the 2017 Hyundai Elantra and 2017 Kia Forte to the dealers you requested. They should be in touch shortly.
The Car Connection's dealer quote process is powered by our partner site CarsDirect.
Your request for a fast, free price quote on a 2017 Hyundai Elantra and 2017 Kia Forte is in process. The CarsDirect Dealer(s) listed below will contact you shortly to discuss your request and to provide a quote. If you have questions now, you can contact the dealer(s) directly using the information provided below or contact CarsDirect's award-winning customer service team at 1.888.CarsDirect (1.888.227.7347) or [email protected]
For your reference, your customer transaction number is .
Tell us a little bit about yourself
Looking for dealers in your area...

*As configured. Excludes taxes, title, license and other customary fees, such as dealer documentation fees, tire and battery disposal fees and, where applicable, finance charges. By clicking on “Get Your Price Quote Now”, you agree to our Terms of Use (including the Supplemental Terms) and Privacy Policy. You further consent to being contacted at the number you provided by CarsDirect and certain participating automotive dealerships, which may include autodials, text messages, and/or pre-recorded calls; this consent is not a condition of purchase or service. Message and data rates may apply.
Have feedback about this experience?
Let us know.
Tags:
2017 Compare Cars Hyundai Elantra News Hyundai News Kia Forte News
2020
The Car Connection
See the winners »
2020
The Car Connection
See The Winner and Nominees »