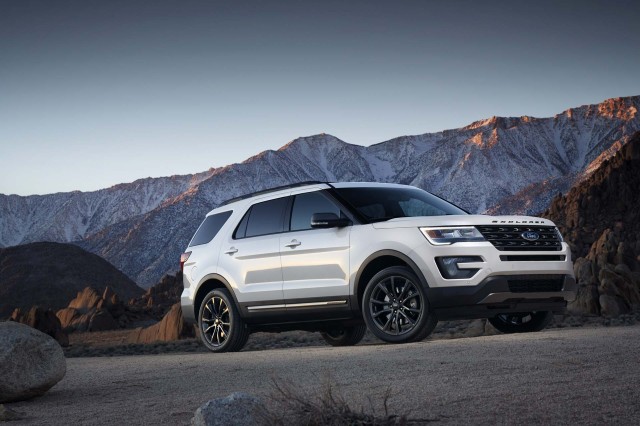 Looking for a three-row, mid-size crossover? Then you're probably cross-shopping a few likely nameplates.

You might be looking at a Honda Pilot, Durango, Jeep Grand Cherokee, and Nissan Pathfinder, but we think the GMC Acadia makes a strong case for itself, with seating for seven and a wide range of trim levels, from moderately priced to luxuriously finished.

The Ford Explorer fits the description as well. As one of the most recognizable nameplates in the automotive world, it's now more family-focused than ever.

So how does the all-new GMC Acadia stack up against the updated Ford Explorer? The results are closer than the overall scores would indicate. (Read more about how we rate cars.) 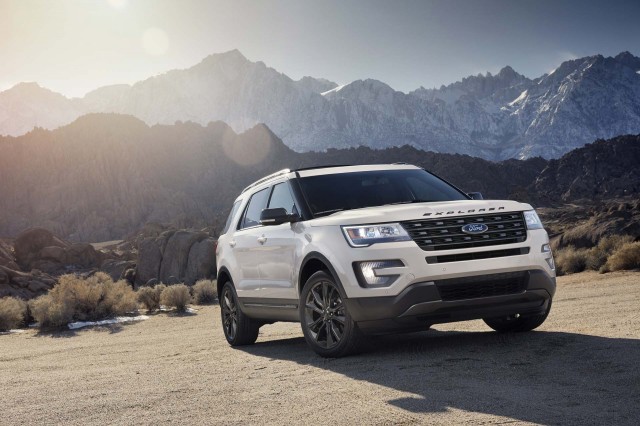 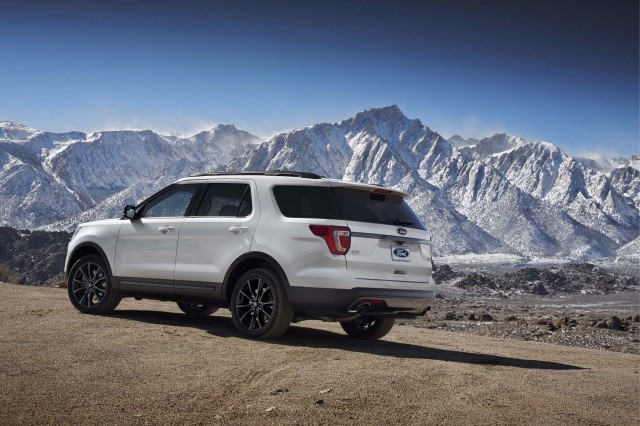 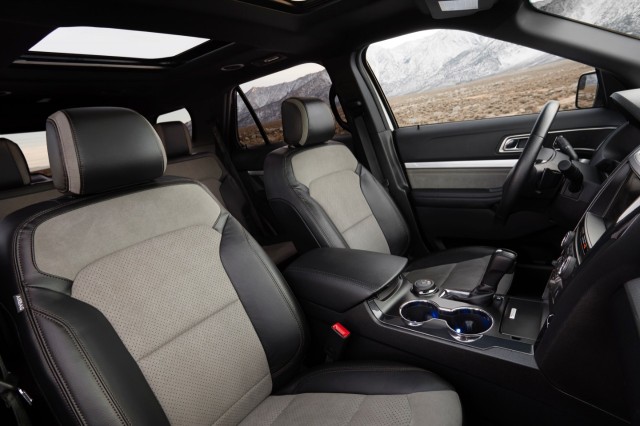 For comfort and utility, it's a job well done by both. The Ford's front seats are shaped very well, with more bolstering than the base Acadia seats; both can be optioned up with leather, heating, and ventilation. The Explorer's a bit shorter than the Acadia, which gives it a little less leg room in its third-row seat. Neither makes it easy for adults to reach the third row.

The Acadia also has about 10 fewer cubic feet of cargo space than the Explorer with all the seats up, but both offer fold-away third-row seats and second-row seats that move forward to make the interiors more flexible. If you're truly fixated on the third-row accommodations…might we show you something in a Honda Pilot? 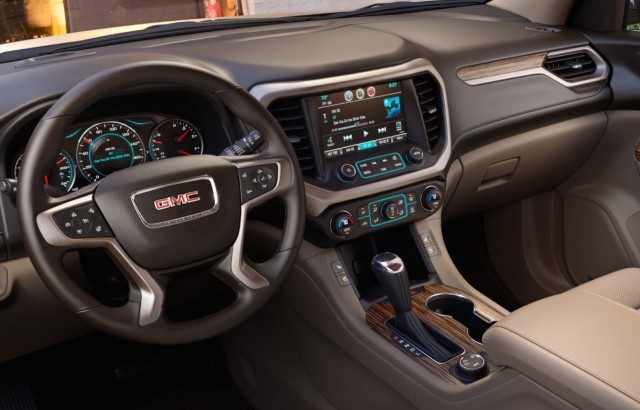 Between these two 'utes, the Acadia's has gone on a diet most recently (it shed around 700 pounds and its footprint is smaller than previous generations) but is still suitable for those who need space for lots of people and cargo. But when it comes to performance, we like the Explorer better. In part, it's because of the diversity of drivetrains it offers.

The Acadia comes in two drivetrain configurations with a 194-horsepower inline-4 and a 310-horsepower V-6, both teamed to a 6-speed automatic, with front- or all-wheel drive. Fuel economy tops out at 26 mpg highway and 23 mpg combined. The Explorer lineup starts with a run-of-the-mill V-6, progresses into a 28-mpg-plus turbocharged inline-4 with a paddle-shifted automatic and front-wheel drive, and is topped off with a twin-turbo V-6 with 350 hp and all-wheel drive, teamed with a paddle-shifted 6-speed automatic. The latter is basically an Explorer SHO in all but name, and our favorite by far.

The Explorer's electric power steering is quick and zesty, while the Acadia's is slower and less responsive. And while the Acadia rides more smoothly on its long wheelbase, the Explorer's still pretty adept at damping its own body motions, while it still offers SUV-like traits, like adjustable traction modes for mild off-roading, wintry weather, sand, and mud. It's no Grand Cherokee, but it's no minivan.

Both the Acadia and Explorer have technology well in hand, but we're reserving judgement on safety until the official scores are in for both SUVs. The Explorer has been scored, and it gets a "Marginal" score in the IIHS' small overlap crash test, but manages great ratings in almost every other test.

In the past, the Acadia has focused more on tradition while Ford reached for future tech. That changed a couple of years ago, with a major update to the Acadia that brought better connectivity features, along with some mild styling changes. Its IntelliLink system offers a refreshingly straightforward interface from its iPad-like screen. On most versions of today's Explorer, virtually everything can be controlled by voice or steering-wheel buttons—including mobile streaming audio, voice-to-text capability, even in-car Twitter, all through an updated, clarified version of MyFord Touch.

Neither the Explorer nor the Acadia can rightly be called an SUV. One does a better job carrying people; the other fares better at faster driving. Neither one would be our first pick for anything more adventurous than a dusty cabin trail. Despite the outward appearances, they're among the closest things we have to minivans without sliding side doors—and that hasn't hurt their popularity one bit.

In the end, the Acadia out points the Explorer by nearly one point on our overall scale, thanks to the GMC's sharp new looks. Once safety is figured in, that gap may widen, but neither SUV is a bad pick right now.

7.3
Expert Rating
The 2017 GMC Acadia wears its new, smaller size well, offering good room for up to seven, improved dynamics and fuel economy, plenty of features, and a touch of family luxury.
6.7
Expert Rating
The 2017 Ford Explorer adds a sport appearance package and Sync 3, both of which are important to today's SUV buyers.

7.0
Expert Rating
A smaller size brings slightly softer styling but the look is refined inside and out.
Read More
6.0
Expert Rating
The 2017 Ford Explorer gets a sport appearance package on lower trims, which is what Explorer buyers are looking for nowadays.
Read More

7.0
Expert Rating
Lighter this year, the GMC Acadia is easier to maneuver and downright quick with the V-6, though the new 4-cylinder struggles when loaded.
Read More
7.0
Expert Rating
The Ford Explorer's wide offering of powertrains is an asset, we like every step along the way.
Read More

9.0
Expert Rating
Pricing comes down into the heart of the market, but the 2017 GMC Acadia can be loaded with features, especially the Denali model.
Read More
9.0
Expert Rating
A Sport Appearance Package is here now for buyers who want their 2017 Ford Explorers to look the part.
Read More

Front Wheel Drive Read Full Specs
Front Wheel Drive Read Full Specs
Compare Free Dealer Price Quote
With competitive price quotes from multiple dealers, you will be prepared when you meet your local car dealer. Please tell us how to contact you so that dealers can compete for your business!
2017 GMC Acadia
There are no GMC dealers in our network that are located near the ZIP code.
2017 Ford Explorer
There are no Ford dealers in our network that are located near the ZIP code.
Thank you!
We have sent your request for price quotes on the 2017 GMC Acadia and 2017 Ford Explorer to the dealers you requested. They should be in touch shortly.
The Car Connection's dealer quote process is powered by our partner site CarsDirect.
Your request for a fast, free price quote on a 2017 GMC Acadia and 2017 Ford Explorer is in process. The CarsDirect Dealer(s) listed below will contact you shortly to discuss your request and to provide a quote. If you have questions now, you can contact the dealer(s) directly using the information provided below or contact CarsDirect's award-winning customer service team at 1.888.CarsDirect (1.888.227.7347) or [email protected]
For your reference, your customer transaction number is .
Tell us a little bit about yourself
Looking for dealers in your area...

*As configured. Excludes taxes, title, license and other customary fees, such as dealer documentation fees, tire and battery disposal fees and, where applicable, finance charges. By clicking on “Get Your Price Quote Now”, you agree to our Terms of Use (including the Supplemental Terms) and Privacy Policy. You further consent to being contacted at the number you provided by CarsDirect and certain participating automotive dealerships, which may include autodials, text messages, and/or pre-recorded calls; this consent is not a condition of purchase or service. Message and data rates may apply.
Have feedback about this experience?
Let us know.
Tags:
2017 Compare Cars Ford Explorer News Ford News GMC Acadia News
2022
The Car Connection
See the winners »
2022
The Car Connection
See The Winner and Nominees »