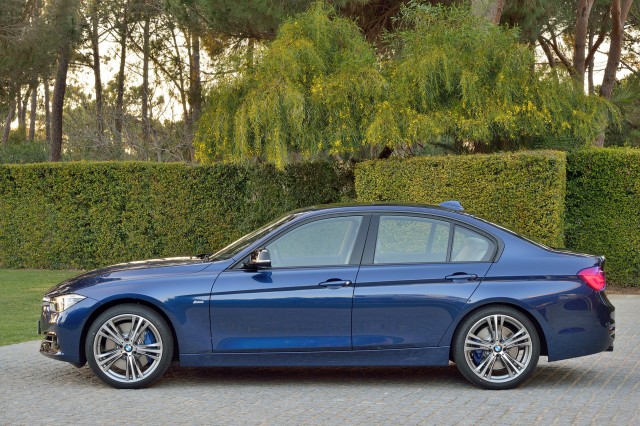 The BMW 3-Series has been a sport-sedan benchmark for decades. The Audi A4 is one of a thriving pack of challengers that now handily beat the Bimmer on a variety of fronts.

Is the A4 one of those sport-luxury sedans with the whole package--a BMW-beating set of road manners, equipment, safety, and styling?

We rate the 3-Series higher than the A4, but there's a caveat. We've driven the new-for-2017 A4 extensively, but haven't yet tried out BMW's new base turbo-4 engine or rated it under our new scoring system.

For now, we're leaving these results with a mix of 2016 BMW and 2017 Audi scores, until we've given BMW's new base engine a fair shot. Our revised scores have trended lower than in previous years, so this one seems likely to be an upset. (Read more about how we rate cars.)

Also note that, while the 3-Series comes in wagon and hatchback forms, and the A4 as the new Allroad wagon, we're really getting down to four-door sedan nuts and bolts here. 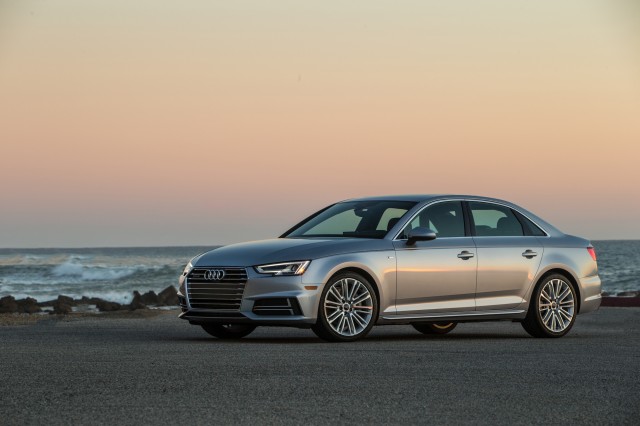 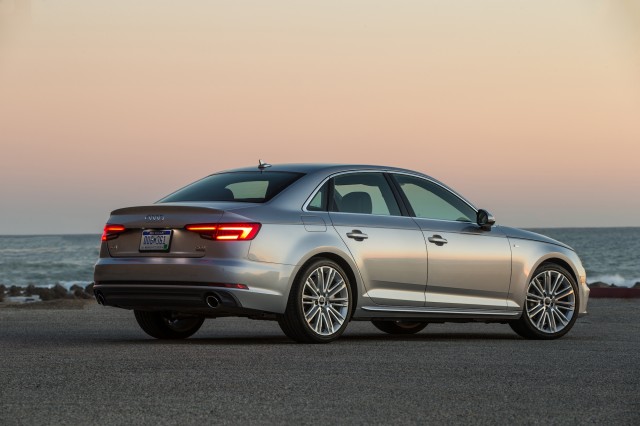 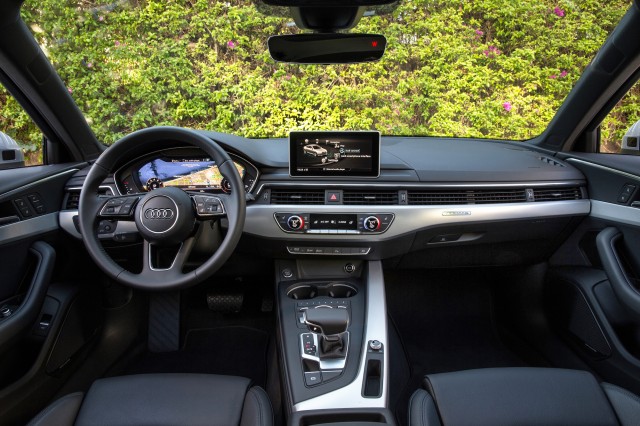 For now we'll compare the new A4 with the 2016 3-Series, and in that light, the Audi fares well. It doesn't quite offer the wide range of powertrains that BMW does, in the aftermath of the diesel scandal at VW. Under the hood, the base A4 uses a 2.0-liter turbocharged 4-cylinder, in 190-hp and 252-hp tune, with a dual-clutch 7-speed or a rare 6-speed manual. We've been duly impressed with the higher-output engine's gutsy feel and the dual-clutch's swift gearchanges.

BMW offers a low-output version turbo-4, dubbed the 320i; there's a higher-output 240-hp 328i that's by far more common in 2016 BMW 3-Series cars. BMW also offers the 335i, with a turbocharged inline-6 good for 300 horsepower and 300 pound-feet of torque. There's also a 328d, with 181 horsepower from a turbodiesel 4-cylinder engine. Finally, a plug-in hybrid 330e is available in sedan form. It's a dizzying array of powertrains, but the two higher-horsepower gas offerings reinforce BMW's reputation for building excellent powertrains, and its okay-by-the-EPA diesel is a reasonable alternative.

The 3-Series still has a dynamic edge, though the A4 has closed a lot of the gap. Unlike the 3-Series, the A4 is a front-drive-based sedan, with quattro all-wheel drive available in higher-trim models. While this bias--and its frontward weight bias--ultimately brings it up somewhat short of the 3-Series' ultimate dynamics, the available quattro system makes the A4 as competent as any luxury sedan in foul weather. BMW's xDrive system is available in the 3-Series, but only in a limited number of models.

When it comes to ride quality and handling, both cars err a bit toward the sporty side, showing occasional harshness over rougher surfaces. Some will call it the price they pay for their sharper handling, but others will find the Mercedes-Benz C-Class's more plush ride preferable to either. BMW's steering tracks much more cleanly than the A4, but Audi's available adaptive suspension does a remarkable job of handling a wide range of road surfaces. What used to be a clear BMW advantage in performance is now almost a wash. 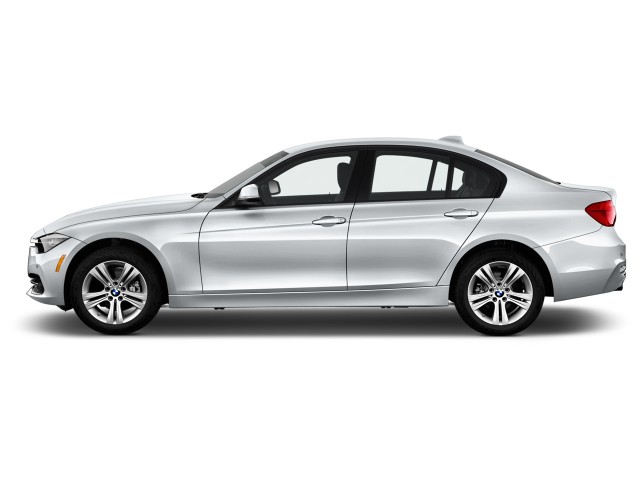 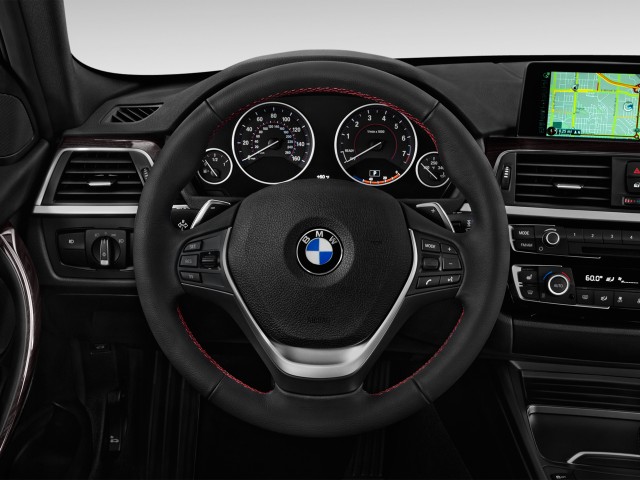 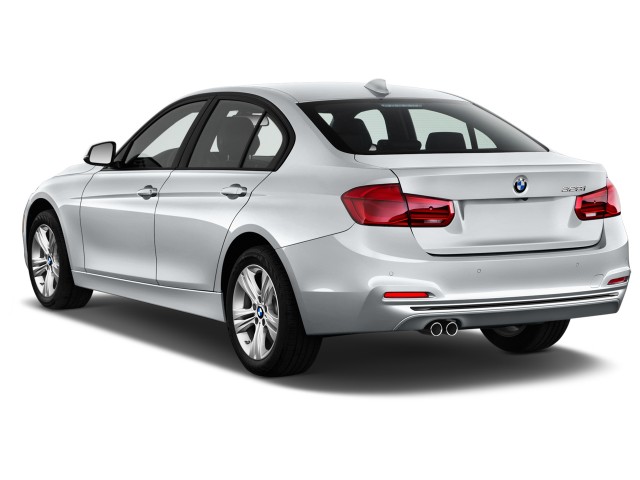 With both models growing larger, the comfort and quality equation is close to a draw, too. Front seats are spacious and comfortable in both the 3-Series and the A4, and at last, the rear seats in both are commodious enough for adults to take longer trips. They're a lot larger than the back benches in cars like the ATS and the Jaguar XE.

Quality, fit, and finish are very good in both cars. BMW's cockpit has improved, though some touches can seem out of character--like the optional nav screen that perches on top of the dash, instead of integrating into it. The A4 is a more seamless piece, with a lush new dash-topping LCD screen that renders Google Earth and Street View maps in gorgeous detail. For most, it will come down to a matter of taste: where the BMW is sometimes drab, sometimes busy, the Audi is sleek and polished, uncluttered and largely intuitive.

Both cars also offer a host of advanced technology, with iDrive powering the 3-Series' infotainment and MMI behind Audi's. While both systems are advanced and capable, MMI is slightly more intuitive to most. Both of these cars now have Bluetooth standard across the model line. The 3-Series also offers an excellent head-up display (HUD) that's just become available on the A4, tying speed, navigation, and other information into a display projected onto the windshield. Audi also has in-car wireless Internet with Audi Connect, which in turn feeds data to that exceptional nav system.

Finally, the matter of safety. The BMW 3-Series has been rated five stars overall by the National Highway Traffic Safety Administration (NHTSA), but the IIHS gives it a Marginal score for small-overlap protection. The A4 is a Top Safety Pick+, though the NHTSA hasn't weighed in just yet.

With the wide range of models and body styles tucked under either nameplate, both the BMW 3-Series and Audi A4 have something to appeal to most luxury buyers. The BMW still has the performance edge that adrenaline junkies seek out consistently, though the Audi S-cars aren't far off. But when high-tech gadgets and a purer design are the better lure, it's the Audi lineup that wins.

8.0
Expert Rating
The 2017 Audi A4 advances its sport-sedan credentials in lots of incremental ways, but the virtual cockpit drops the digital mic.
8.2
Expert Rating
The 2016 BMW 3-Series delivers outstanding performance and comfort in a tastefully understated package.

8.0
Expert Rating
The Audi A4 isn't adventurous outside, but inside, the virtual cockpit vaults it into the future.
Read More
8.0
Expert Rating
2016 BMW 3-Series sedans and wagons provide the quintessential sporty experience, which is somewhat softened in the larger Gran Turismo hatchback.
Read More

8.0
Expert Rating
The 4-cylinder in the A4 makes perfect sense for the road ahead, and so do its adaptive dampers.
Read More
9.0
Expert Rating
Expect confident handling and excellent dynamics regardless of the 2016 3-Series model you choose.
Read More

9.0
Expert Rating
With screens galore and sporty trim lines, the latest Audi A4 makes its mark in technology and features.
Read More
9.0
Expert Rating
A 2016 BMW 3-Series doesn't come cheaply, but with à la carte options you can get what you want without paying for anything you don't.
Read More

7.0
Expert Rating
Gas mileage has made gains in the 2017 Audi A4, but the high-mileage option is off the table.
Read More
7.0
Expert Rating
Fuel efficiency is pretty good for sport sedans, there's a highly efficient diesel, and a 330e plug-in hybrid with a projected 70+ MPGe is slated to make an appearance soon.
Read More

Front Wheel Drive Read Full Specs
Rear Wheel Drive Read Full Specs
Compare Free Dealer Price Quote
With competitive price quotes from multiple dealers, you will be prepared when you meet your local car dealer. Please tell us how to contact you so that dealers can compete for your business!
2017 Audi A4
There are no Audi dealers in our network that are located near the ZIP code.
2016 BMW 3-Series
There are no BMW dealers in our network that are located near the ZIP code.
Thank you!
We have sent your request for price quotes on the 2017 Audi A4 and 2016 BMW 3-Series to the dealers you requested. They should be in touch shortly.
The Car Connection's dealer quote process is powered by our partner site CarsDirect.
Your request for a fast, free price quote on a 2017 Audi A4 and 2016 BMW 3-Series is in process. The CarsDirect Dealer(s) listed below will contact you shortly to discuss your request and to provide a quote. If you have questions now, you can contact the dealer(s) directly using the information provided below or contact CarsDirect's award-winning customer service team at 1.888.CarsDirect (1.888.227.7347) or [email protected]
For your reference, your customer transaction number is .
Tell us a little bit about yourself
Looking for dealers in your area...

*As configured. Excludes taxes, title, license and other customary fees, such as dealer documentation fees, tire and battery disposal fees and, where applicable, finance charges. By clicking on “Get Your Price Quote Now”, you agree to our Terms of Use (including the Supplemental Terms) and Privacy Policy. You further consent to being contacted at the number you provided by CarsDirect and certain participating automotive dealerships, which may include autodials, text messages, and/or pre-recorded calls; this consent is not a condition of purchase or service. Message and data rates may apply.
Have feedback about this experience?
Let us know.
Tags:
2017 Audi A4 News Audi News BMW 3-Series News Compare Cars
2021
The Car Connection
See the winners »
2021
The Car Connection
See The Winner and Nominees »