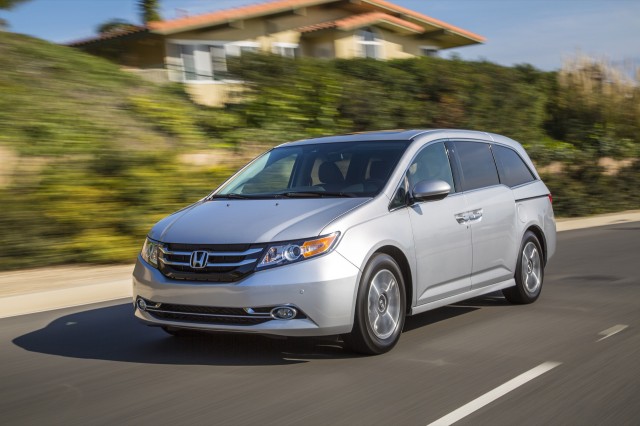 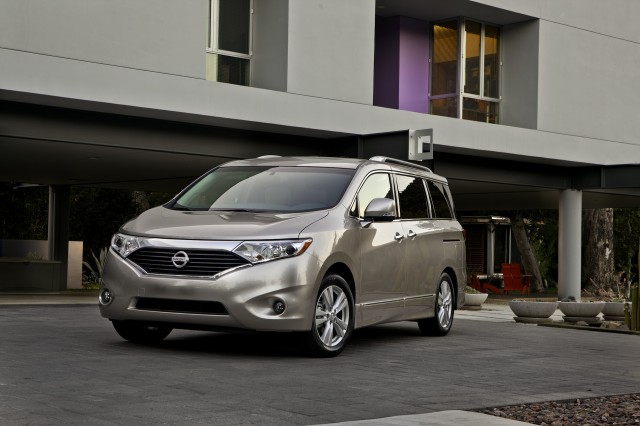 The minivan is loved and embraced by some parents just as much as it's loathed and shunned by others. Regardless which camp you're in, minivans are still the gold standard for family utility and all-around usefulness.

The Nissan Quest and Honda Odyssey are two we've rated highly in the past. Both were new for the 2011 model year and have seen several rounds of minor updates and improvements since then. In their current forms, the Odyssey has continued its long hot streak of minivan goodness, with better gas mileage and more features, while the Quest has taken several steps back in size, flexibility, and functionality.

MORE: Read our reviews of the 2016 Honda Odyssey and 2016 Nissan Quest 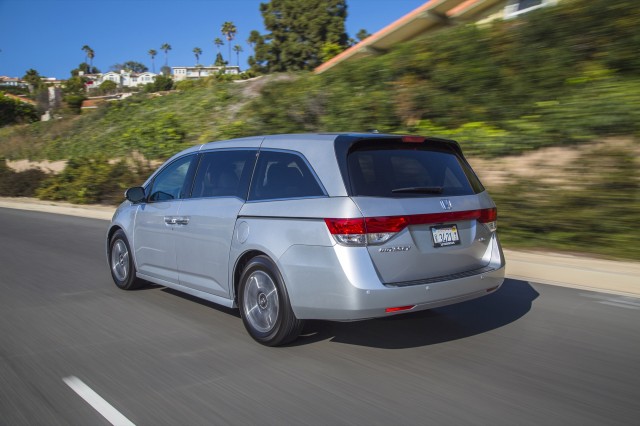 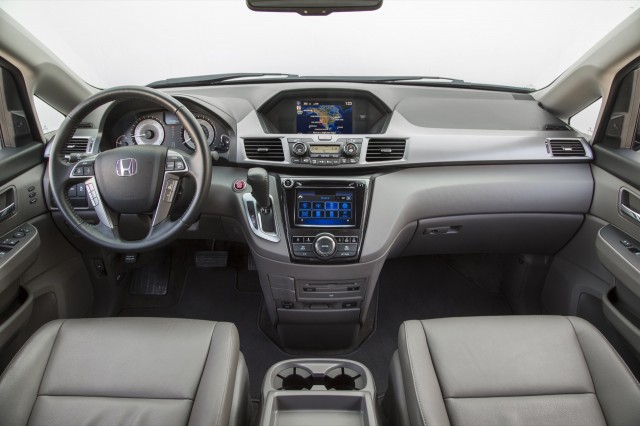 Minivans sell on just a few factors: safety, flexibility, and features. In each of those ways, the Odyssey handily wins this face-off. The Quest is smaller a little more city-friendly, and it steers as well as or better than the Odyssey. It's also one of the best-looking of today's minivans, too, with its bulldog nose and its airy greenhouse.

Beyond that, the Odyssey just clobbers the Quest. In safety scores and features, it circles the bases around the Nissan: the Honda's a Top Safety Pick and earns five stars from NHTSA, while the Quest has earned one of the lowest scores yet in the IIHS' newest small-overlap crash test.

Flexibility is key here too, and the Odyssey's three-row seating is much more spacious and useful than the seven-passenger configuration in the Quest. The eight-passenger, three-row Odyssey has a third-row seat that folds flat into the floor to create a longer load space; the Quest's third row folds down but not into the floor, leaving tiered cargo spaces that can be convenient or a nuisance, depending on your needs.

Neither the Odyssey or the Quest has fold-away second-row seats, but the Honda's second-row seats tilt and slide outward for more room. The Quest used to have a cabin with two rows of disappearing seats like Chrysler's minivans, which makes the new one such a letdown.

For entertaining the troops, you'll have to buy more expensive minivans, regardless of brand. Both Honda and Nissan offer goodies like a DVD entertainment system and power sliding doors and tailgates, and neither has the trick features like Chrysler's in-car wireless internet. The HondaVAC vacuum system in the Odyssey Touring Elite wins here; it's well integrated and it's just plain clever. 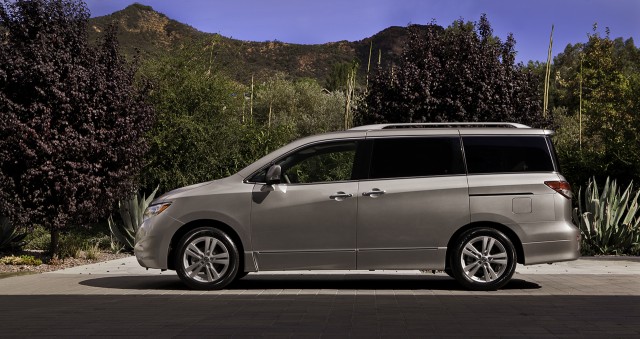 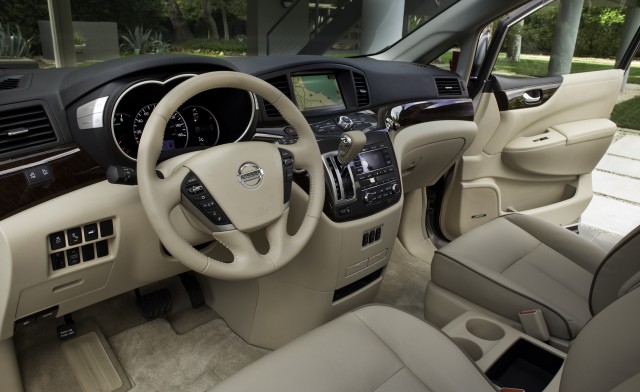 Finally, for performance, both the Quest and Odyssey depend on V-6 engines for performance. The Honda sports a 6-speed automatic and the Quest uses a continuously variable transmission to eke out better acceleration and gas mileage. The Quest handles pretty well, nearly as well as the benchmark Honda, but its drivetrain emits a little more noise and does much worse on city fuel economy tests than the Honda. Neither model offers all-wheel drive, either: Toyota's Sienna is the only minivan left in that market segment.

Fully trimmed, both vans top $40,000, a number that would make us nervous in the face of future college bills. Moderately equipped, the Odyssey still strikes us as the better buy thanks to superior safety scores and its better interior room. If you want a frugal, flexible minivan with a rock-bottom price, we'd also seek out the base Toyota Sienna or better yet, the value-packed versions of the Dodge Grand Caravan, which leads the functionality and feature race while posting some unimpressive crash-test scores of its own.

8.0
Expert Rating
The 2016 Honda Odyssey stands at the top of the minivan heap, with more design flair and more driving enjoyment than most other three-row rivals.
7.0
Expert Rating
The Nissan Quest may have the best road manners of any minivan, but it lags in safety and space, two musts for most minivan buyers.

7.0
Expert Rating
Well-tuned ride and handling make the Odyssey a delight to drive compared to most ofther big-family vehicles.
Read More
7.0
Expert Rating
The Quest offers the best acceleration and steering feel in a minivan, but some may not like the sluggish CVT.
Read More

9.0
Expert Rating
The Odyssey's middle-row seats don't fold into the floor, yet you make up for that with excellent seat comfort in all positions.
Read More
7.0
Expert Rating
The Quest doesn't offer the smart cargo and seating package of the best in class, though it is still quite purposeful.
Read More

8.0
Expert Rating
The most expensive Odyssey Touring Elite trim is where you'll have to go for the most desirable entertainment, convenience, and safety features.
Read More
8.0
Expert Rating
Order it with the features that you would want in a minivan and the Quest easily tops $30,000.
Read More

Front Wheel Drive Read Full Specs
Front Wheel Drive Read Full Specs
Compare Free Dealer Price Quote
With competitive price quotes from multiple dealers, you will be prepared when you meet your local car dealer. Please tell us how to contact you so that dealers can compete for your business!
2016 Honda Odyssey
There are no Honda dealers in our network that are located near the ZIP code.
2016 Nissan Quest
There are no Nissan dealers in our network that are located near the ZIP code.
Thank you!
We have sent your request for price quotes on the 2016 Honda Odyssey and 2016 Nissan Quest to the dealers you requested. They should be in touch shortly.
The Car Connection's dealer quote process is powered by our partner site CarsDirect.
Your request for a fast, free price quote on a 2016 Honda Odyssey and 2016 Nissan Quest is in process. The CarsDirect Dealer(s) listed below will contact you shortly to discuss your request and to provide a quote. If you have questions now, you can contact the dealer(s) directly using the information provided below or contact CarsDirect's award-winning customer service team at 1.888.CarsDirect (1.888.227.7347) or [email protected]
For your reference, your customer transaction number is .
Tell us a little bit about yourself
Looking for dealers in your area...

*As configured. Excludes taxes, title, license and other customary fees, such as dealer documentation fees, tire and battery disposal fees and, where applicable, finance charges. By clicking on “Get Your Price Quote Now”, you agree to our Terms of Use (including the Supplemental Terms) and Privacy Policy. You further consent to being contacted at the number you provided by CarsDirect and certain participating automotive dealerships, which may include autodials, text messages, and/or pre-recorded calls; this consent is not a condition of purchase or service. Message and data rates may apply.
Have feedback about this experience?
Let us know.
Tags:
2016 Compare Cars Honda News Honda Odyssey News
2021
The Car Connection
See the winners »
2021
The Car Connection
See The Winner and Nominees »