Connect with our dealer and finance partners through our site and ask for details regarding their at-home car buying services.
OK
HomeNewsLos Angeles

Where Do The Most Helpful Drivers In America Live? 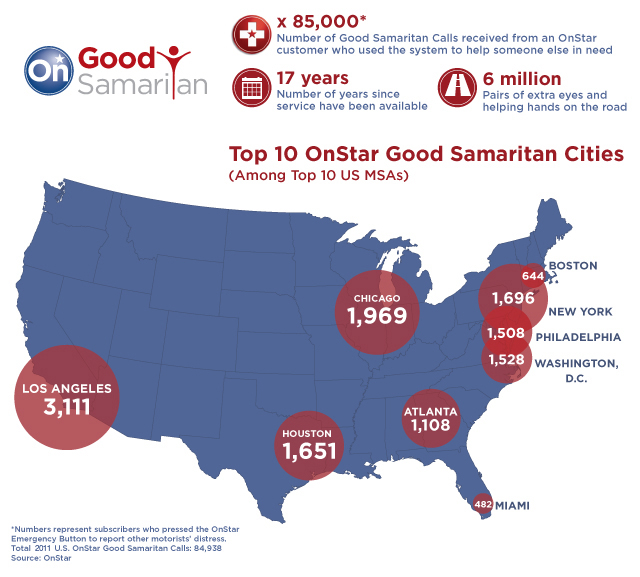 Using anonymous subscriber interaction dataOnStar found that of the 10 largest U.S. Metropolitan Statistical Areas, Los Angeles had 3,111 Good Samaritan calls in 2011, more than 1,200 ahead of the next major city, Chicago.

Every year, thousands of drivers contact OnStar operators to let them know about other motorists involved in collisions, vehicle fires, and other dangerous situations. OnStar keeps track of these "Good Samaritan" acts, and recently the company ranked America's ten biggest metro areas, based on the number of calls received.

At the top of the list, we find Los Angeles -- which, given the size of the city and the number of people who drive through it every day, isn't entirely surprising (even though LA is technically the birthplace of road rage). In total, Los Angeles had 3,111 Good Samaritan calls in 2011. At the bottom? The Miami area, with 482. Here's the full list:

But this isn't just about giving one city bragging rights over another. OnStar's vice president of Subscriber Services, Joanne Finnorn, says that the company is devising a way to reward do-gooders: "In honor of these good deeds OnStar is launching a program this year to recognize subscribers who have displayed exemplary Good Samaritan efforts".

Details of that program should be announced soon. Stay tuned, Dudley and Diana Do-Rights.