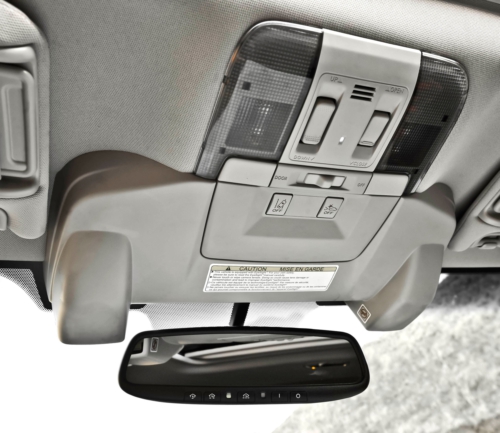 If you want advanced safety systems on your next set of wheels but can't afford an expensive luxury ride, you may want to take a trip down to your local Subaru showroom. Later this year, Subaru will roll out the 2013 Legacy and Outback, which will offer a host of safety features like pre-collision braking, lane-departure alerts, and adaptive cruise control.

Those features arrive courtesy of Subaru's new EyeSight driver assistance system, shown in the photo at left. The two protrusions you see on either side of the rear-view mirror contain cameras that keep track of obstacles in the vehicle's path. That's an improvement over radar-based systems that reside in vehicle bumpers, which can get damaged in fender-benders.

Like its namesake -- i.e. human eyesight -- EyeSight merges its two camera images into one stereo image to judge position and distance. Subaru has put this system to use in at least four major ways:

Pre-collision braking
EyeSight can identify vehicles, cyclists, pedestrians, and other obstacles in front of the vehicle. If one of those obstacles gets too close and the Subaru driver fails to take evasive action, EyeSight can work with the braking system to slow the car and even bring it to a full stop if the vehicle is traveling below 19 mph. Above that speed, EyeSight applies the brakes to minimize collision damage.

Lane-departure warning
EyeSight doesn't just keep tabs on obstacles: it also tracks lane markers. If a driver veers across one without using the turn signal -- or if she swerves too much within the lane itself -- EyeSight will issue an alert. (NB: This may force freeway travelers to use their signal lights more regularly. Awesome.)

Adaptive cruise control
There's nothing as frustrating as finding the perfect speed, hitting the cruise control button, and then having one inattentive driver ruin it all by puttering along too slowly. Once a Subaru driver sets her preferred speed, EyeSight will monitor surrounding traffic, accelerating and braking as necessary, but always returning to cruising velocity. That doesn't give drivers license to start checking Facebook and Twitter, but maybe Google will come along and fix that soon.

Stop light nudge
Every day, it seems like we're stuck at a traffic light -- late for work or a meeting or happy hour  or a post-work happy hour meeting -- and when the light finally turns green, the yahoo in front of us doesn't budge because he's engrossed in a phone call or Words With Friends. EyeSight prevents you from being that guy by sounding an alert when the vehicle ahead of you has moved on.

EyeSight will debut at the upcoming 2012 New York Auto Show. It will first be available on 2013 models of the Legacy and Outback, with others to follow.

Pricing for the system hasn't been announced, but Subaru says that it will be "one of the most affordable of such technologies available in the United States market". Stay tuned for details.