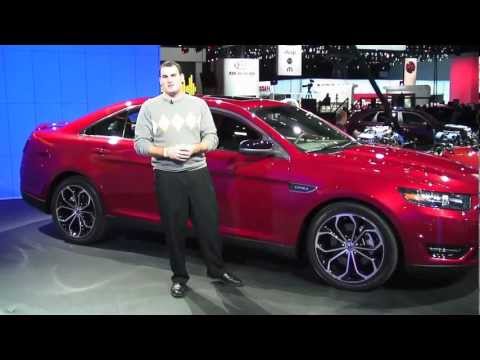 The Ford Taurus was once the epitome of the mainstream, All-American mid-size sedan. But the current version of the Taurus has never been anything but a niche car, and as much as the 2013 Taurus is much-improved, we'd venture to say it's destined to stay that way.

Why? While it's a big, comfort-oriented (or performance-oriented) sedan with a distinctive design, and Ford has made some meaningful improvements on it for 2013, it remains a car for which you need to really like what you see—as that's not entirely what you get.

What you see is one of the longest sedans on the market, at nearly 203 inches long; the 2013 Ford Taurus is wide, too, and its long overhangs and rather long roofline all serve to amplify the impression. It's stylish, both in its swept-back profile and in the details, which now include new lower-body aero work and an all-new grille—a more mature one that fits right in above the front end of the 2013 Ford Fusion—plus new crisp new LED-outline taillamps and a great set of new wheel designs.

The Taurus looks like it has amazing trunk space, and it does—with a low cargo floor, and a reasonably large pass-through for long items, plus split folding rear seatbacks.

But take a step inside, and you'll see that the Taurus, unfortunately, carries one very significant piece of baggage over to 2013: its surprising lack of passenger space. For a car this large, its cabin, practically speaking, doesn't feel significantly more spacious or airy than most compact sedans—or the more upright, straightforward 2012 Fusion cabin.

Especially in the front seats, the cabin feels tight, intimate. While it's wide, your legs are confined to a relatively narrow footwell, against a wide center console; and the entire instrument panel flows dramatically back in a gentle contour. It's space-robbing, and we're probably not the only ones to think that this dash layout as a whole would feel more in place in a touring coupe (such as a Thunderbird?). And looking back, the entire cabin feels quite small...Where'd the space go?

Those first impressions remain as they were. But in more subtle ways, Ford has upgraded the Taurus interior to feel more modern, more upscale, and frankly, more like a luxury car inside.

Soft-touch all the way

That includes soft-touch materials all the way around the driver and front passenger, in pretty much all the touch points—including, finally, the space that those knees are against all the time. Plus door trims and upholsteries have been upgraded, and power lock and window controls are completely new, with better tactility (replacing the carry-over switches Ford had used for years).

A front-wheel-drive Taurus 2.0T model with an EcoBoost four-cylinder engine is on the way later this year, and that's really the big news, as its 31-mpg (or higher) EPA highway rating will beat some V-6 rivals. In the meantime we were able to drive a 2013 Ford Taurus SHO, and a loaded 2013 Taurus Limited AWD, around Portland, plus along a challenging route of curvy backroads over Oregon's Coast Range.

The 3.5-liter in SE, SEL, and Limited models makes 288 horsepower and 254 pound-feet, and it adds Ford's Ti-VCT (variable camshaft timing) to increase fuel efficiency and help it be more responsive across the rev range. The changes work exactly as advertised; it's not especially strong off the line, but a very sharp throttle calibration and a rather low first gear makes it feel so; the engine feels especially strong in the low to mid revs, exactly where the revs are going to land in a full-throttle upshift—so the Taurus feels quick.

The SHO again gets a 365-horsepower, 3.5-liter V-6, with turbocharging and direct injection, and making a fat 350 pound-feet of torque at just 1,500 rpm (all the way up to 5,000 rpm). Zero-to-60 times for the SHO will be as short as the low-five-second range—so faster than a V-8-powered Chrysler 300C but not quite as quick as an SRT8. Thanks to the wonders of turbo boost, the SHO's rocket-like thrust isn't interrupted by upshifts, and there's seemingly no let-up as you head toward triple digits.

But in the corners, don't expect the SHO, or any of these all of these AWD Taurus models, to drive like a rear-wheel-drive sport sedan; they handle like large, front-wheel-drive cars, with the system only sending power to the rear wheels when there's measurable slip and the need for more grip.

Better steering, braking—and you can feel it

The electric steering rack is now hard-mounted (to the subframe), which helps tremendously with steering feel on and just off center. Now, the system loads nicely, and as we noticed when pushing the Taurus SHO hard on tight corners on mountain roads, you do now feel just a bit of bite and feedback through the wheel. Brakes have been substantially upgraded across the line, and pedal feel is more confident.

Multi-contour seats are a segment-exclusive feature in the Taurus family this year, and we found that they allow an added measure of adjustability and support.

The Taurus SHO that we drove very enthusiastically over more than a hundred miles averaged 16.5 mpg for that distance (it's rated 17 mpg city, 25 highway), while the Taurus Limited AWD we piloted later had been averaging nearly 20 mpg over an entire day and more than 250 miles of driving.

Ford has also introduced a host of chassis measures that, combined, serve to give the Taurus a more quiet ride with less impact harshness and better isolation from road noise especially.

We'd recommend against the 20-inch wheels which, from our driving experience in a Taurus Limited, seem to negate some of these gains in ride and refinement. With them, the ride is a little more abrupt, with more impact harshness, but they bring no noticeable improvement in handling.

There's one more very important upgrade in the 2013 Ford Taurus: MyFord Touch, along with a software upgrade that, Ford says, cures a number of hiccups and user issues. Ford says that responsiveness was improved with the update, but we still found the system sluggish at times, requiring a couple of presses before it would react for some tasks. We'll update you after we've had more time with the revision—and at first glance, we really like the improved font size and more intuitive on-screen buttons.

Below MyFord Touch, the center stack now moves to capacitative controls—relying on a touch of the finger rather than a real button. However the hazard switch is a real button, just under the screen.

And in addition to all the impressive safety equipment that the Taurus already includes—like electronic stability control, a full roster of airbags, MyKey, and an SOS Post-Crash Alert System, the Taurus offers an available blind-spot system with cross-traffic alert, as well as adaptive cruise control with collision warning and brake support (which gives audible and visual warnings, and primes the braking system, if you're closing in on slower or stopped traffic).

SHO: Performance without the constant reminders

We really walked away impressed with the Taurus SHO. In short, it's the sort of sophisticated touring sedan that you could drive rapidly for hundreds of miles a day, enjoying both the Interstates and the 'blue roads,' without a lot of fatigue. It's not a high-involvement car, but that feels like the point: The Taurus SHO has the capability to tenaciously take on a twisty road, and be quite rewarding; it just doesn't remind you of that the other 95 percent of the time, with more noise or vibration, when you'd rather go in comfort.

We also liked the new front-end look most in the Taurus SHO; standard Taurus models get a grille with thin horizontal chrome bars, while the SHO gets a blacked-out metal-mesh grille and lower airdam.

Then comes price. Pricing starts at $27,395, but you'll have to pass the $30k barrier to get MyFord Touch, and to take advantage of all that's offered, you might want the Limited. The entry price for the SHO is $39,995, including destination, and a well-optioned SHO can still land well above $45k—as was ours. That's about the same price as a Volvo S80 T6 AWD, or within a few grand of the starting price for a number of sport sedans like the BMW 5-Series, Mercedes-Benz E Class, and Audi A6. The Taurus Limited we drove totaled $41,230.

The SHO's natural competitor, we think, is the Chrysler 300C. Would we rather take a Chrysler 300C or a Taurus SHO? They're about the same price, both with all-wheel drive. And really, it's a hard call, depending on where you are in life; the Chrysler is more straightforward, brash, and edgy, while it's hard to argue with the way the Ford soothes, satisfies, and eats up the miles.

We wish we could say that the collection of changes Ford has given the Taurus for 2013 give it lots more universal appeal, but all said, we're not sure they do. As much as the SHO might hit the mark for a narrow profile of 'comfort-oriented enthusiast,' these two Taurus sedans we drove will still turn away a lot of potential buyers because of their prices, their fuel-economy ratings, or—most likely—their still-oddly-packaged interior.

With the introduction of the four-cylinder EcoBoost Taurus later in the model year, Ford will have its best chance to recast the Taurus for a different kind of shopper; we hope to update you later this year about whether that's the case.