Volvo's Famous 'Drive It Like You Hate It' Ad Reimagined: Video 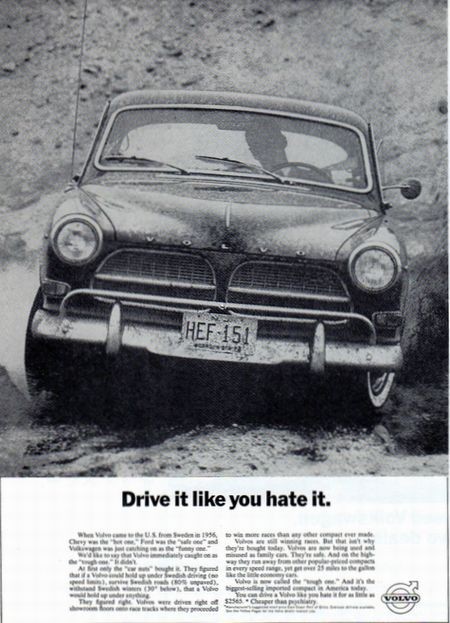 If you're reading this from North America or Western Europe, you're probably a little groggy thanks to the return of daylight savings time. We recommend easing into your work week with a short video about Volvo's famous "Drive It Like You Hate It" ad from 1962, reimagined by its creator, Amil Gargano, for the digital age.

Gargano is a first-generation American and a native of Detroit. He is also a bona fide Mad Man -- a player in Madison Avenue's advertising industry during the 1960s. He began his career with mega-agency Campbell-Ewald, then in 1962 opened his own shop, Ally & Gargano, with a couple of close friends. Their first account? Volvo.

At the time, Volvo had been selling cars in the U.S. for less than a decade, and it was still trying to find its identity. Inspired by the rough driving conditions found in Sweden at the time -- chilly temps, no speed limit, and lots of unpaved roads -- Gargano and his colleagues decided to brand Volvo as a tough car that could stand up to anything.

The resulting print and TV campaign was called "Drive It Like You Hate It". It was hugely successful.

Fifty years down the road, Google invited Gargano to re-imagine that campaign, using today's connected technology. First, Gargano got a crash-course in that technology; then, he and the Google team found their story -- in Irv Gordon, who has logged over 2.7 million miles in his 1966 Volvo P1800. The re-envisioned ad campaign involves tracking Gordon's progress as he approaches the 3,000,000 mile mark.

The result is pretty spectacular. And that's not just our opinion: Volvo liked it, too. Have a look at the eight-minute mini-documentary chronicling the whole process, and scroll down a little further to see the original "Drive It Like You Hate It" TV spot.