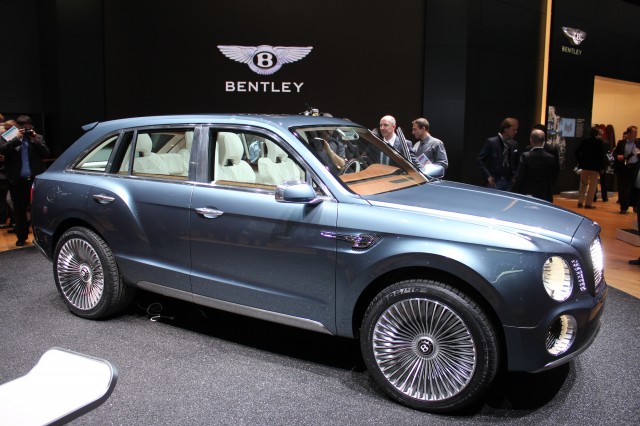 Meant to mingle in garages with Mulsannes and Continentals, the EXP's billed as a "luxury performance SUV concept" that clearly has a future in the British brand's lineup. Executives at Volkswagen Group indicate the Bentley, and a similarly sized Lamborghini SUV to be previewed next month at the Beijing auto show, are almost certain to be approved for production.

The why and where are simple: SUVs are still popular and a growing market segment in places like China, Russia, and the Middle East, and it's buyers in those regions that have the most potential for expansion for the super-luxury brands.

Though a concept at Geneva, the EXP 9 F--introduced at the show with a display of falconry--is one way Bentley could expand its brand and attract new customers. It's the same concept that brought Mercedes-Benz into the SUV market, and Honda into the pickup truck market, with some results obviously better than others.

The EXP 9 F's styling is pointedly controversial. Some of the stamping show an obvious family relationship to today's Continental lineup, but according to Bentley designers, the details have been amplified for show-car audiences. After all, it's only Bentley's second concept car in the past two decades. Audiences in Geneva were short on praise for the exterior design, but the interior's lavish wood and leather trim and built-in picnic fitments were clear winners, as were its LCD instruments and tablet-based infotainment system.

Bentley says the concept's been designed for autobahn performance and all-terrain traction. Details of the mechanicals are few, but the concept is powered by a twin-turbo version of today's Bentley 6.0-liter W-12 engine. Bentley officials suggest a V-8 version is a natural, given that the brand's just launched an eight-cylinder in its Continental GT and GTC two-doors; a plug-in hybrid is a distinct possibility.

The SUV is made possible by Bentley's place in the Volkswagen Group, which already fields SUVs for its VW, Audi, and Porsche brands. The Cayenne marked a turning point for the Porsche franchise, in terms of profitability and reach. It's done exactly what VW now hopes to do with Bentley and, later, Lamborghini.

But that expansion won't be happening just yet. If the new SUVs get approval for production, it's most likely they'll be based on a new architecture, the one that's set to replace the current Porsche Cayenne and VW Touareg platform sometime in the 2015 time frame. The new platform could be previewed in the upcoming replacement for the Audi Q7 seven-seat SUV, which is set for a major revamp sometime next year.

For more on the Bentley EXP 9 F concept and all the production and concept cars from the show floor, see our complete coverage of the 2012 Geneva Motor Show or follow us on Facebook and Twitter.