Connect with our dealer and finance partners through our site and ask for details regarding their at-home car buying services.
OK
HomeNewsReviews 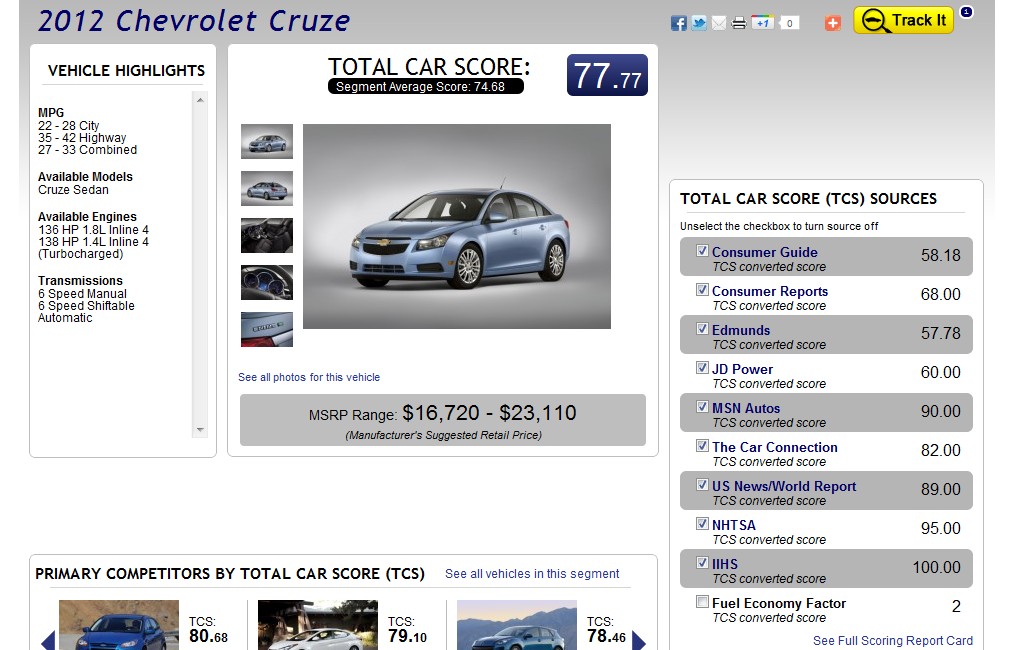 Here at TheCarConnection, we try to provide a little something for everyone: news, recall notices, shopping advice, even political commentary. But at the heart of it all are our new-car reviews, written by TCC's staff of experts. Now, you can find those scores included on a new site called TotalCarScore.

If you've read TCC's reviews, you know that we provide not just a recap of our experiences with a particular vehicle, but also a list of comments from other sources, including fellow critics and owners. So, for example, if you were to look at our review for the 2012 Chevrolet Cruze, you'd start with the vehicle overview, showing how we ranked the car in each of six categories. But then you could click the "Web Chatter" tab to see what sources like Kelley Blue Book have to say about the Cruze, as well as posts from owners, questions from other forums, and even tweets about the vehicle.

TotalCarScore takes a similar approach, believing that the more information shoppers have at their disposal, the better. Though Total Car Score doesn't really do its own reviews, it assembles numeric scores for each vehicle from a variety of sources including TCC, J.D. Power, Consumer Reports, and the Insurance Institute for Highway Safety. It then converts those scores to a 100-point scale and averages them, so consumers have an idea of how a vehicle has been rated across all those sources.

Have a look at the site's own listing for the 2012 Cruze, and you'll see those individual scores listed on the right-hand side of the page. Don't care for or don't trust certain sources? No problem, just uncheck the box next to that score, and it'll be removed from the equation. For example, taking Consumer Reports out of the Cruze's rating changes its score from 77.77 to a flat 79.

Just to be clear, TotalCarScore isn't affiliated with TCC or the High Gear Media family of sites. We should also point out that the site's still in beta, meaning that there are still some loose ends floating about . Still, if you're looking to research a new ride, we'd recommend giving it a look.