Connect with our dealer and finance partners through our site and ask for details regarding their at-home car buying services.
OK
HomeNewsValentine's Day

Valentine's Day: 5 Cars That Say 'I Love You' 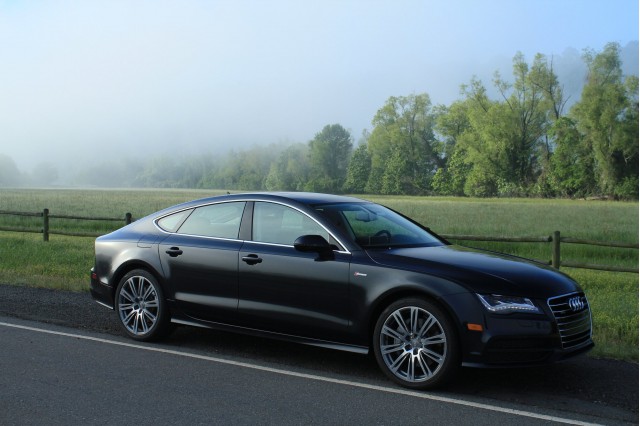 Folks like to believe that Valentine's Day is a modern holiday manufactured by Hallmark to sell greeting cards. But the fact is, Valentine's Day began over 1500 years ago as the feast day for Valentine of Rome, the patron saint of love, young people, and happy marriages. Hallmark just took the ball and ran with it.

Traditionally, Valentine's Day gifts have been limited to sweets, flowers, and the ubiquitous red cards. But what if you're feeling especially generous this year? What if you want to profess your undying love in a way that your better half will never forget? What if you really want to make the rest of us look like a bunch of schlubs? Well, you could get your beloved a car.

But which one? We thought you'd never ask. Here are five that say "I love you" in all the right ways:

2012 Audi A7
You should never judge a book by its cover, but it's hard not to when you're looking at the A7, because it's stunning from almost any angle. That fastback roofline is sleek and sexy, and it'll make your loved one feel the same way -- even if he or she is carrying an extra 15 pounds of winter weight. The A7 brings some sizzle to the sedan segment, and it's the perfect gift for someone who's both practical and stylish. It says "I can bring home the bacon, fry it up in a pan, take the kids to capoeira class, and pick up Coco from doggie day care without breaking a sweat." Giving one to your sweetie says, "Let's take a road trip to Napa and leave the kids and Coco at home."

2012 Chevrolet Sonic
Wise people say that good things come in small packages, and the Sonic proves 'em right. It's cute and clever, with a quirky, stand-out silhouette and an interior that looks more like a cozy cockpit than many of its low-rent competitors. It's got a reputation for big adventure, but when it's done bungee-jumping and making music and leaping out of airplanes, it can come home and snuggle into almost any parking spot on the street. And with a starting price of just under $14,000, it's also the most affordable ride on this list. The Sonic says, "Baby, you fit me like a glove."

2012 Ford Flex
The Flex is not for the person who wants to go gentle into that good night. The Flex is for the person who wants to party 'till the break of dawn, slug a venti double-cappuccino (with soy, please), pick up Bob and Dave from Accounts Receivable on the way to work, bang out the most stunning PowerPoint presentation ever devised by man or beast to win the Goldstein & Parker account, then do it all over again with Mr. Goldstein in tow. Boasting an unmistakable profile, a powerful powertrain, and a full complement of onboard gadgetry, the Flex says, "Honey, you're my everything."

2012 Jeep Grand Cherokee
When Chrysler emerged from its quickie marriage to Fiat, the redesigned Grand Cherokee was one of their first joint offspring (though the father was actually a German by the name of Daimler). Paternity issues aside, the Jeep Grand Cherokee is a near-perfect SUV, able to handle errands, commuting, and life's other minutiae five days of the week, then go offroad and wallow in the mud on the weekends. Giving a Grand Cherokee is like saying, "I don't care who fathered our children, let's drive to Vegas and get married again."

2012 Kia Optima
Got someone who's hard to shop for? Try on the Kia Optima for size. With its attractive lines and sporty interior, the Optima feels special and expensive. But in fact, the Optima starts at under $20,000, meaning that it won't feel like an extravagance to your oh-so-practical significant other. It's the perfect gift for someone who tells you, "No, I don't want anything for Valentine's Day", but secretly expects something really, really good. Giving a Kia Optima says, "Here's a token of my undying affection -- and look! We still have money in the retirement account."