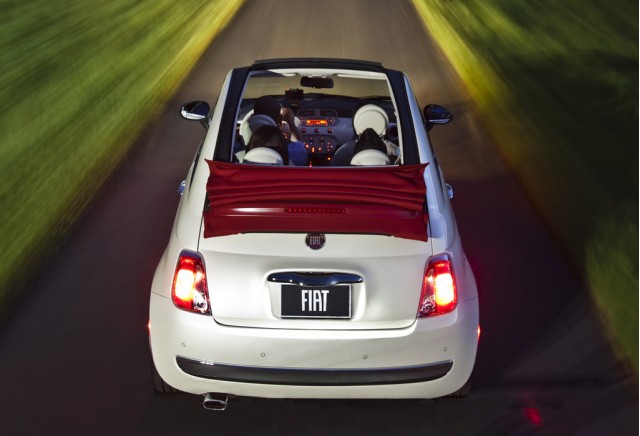 No doubt about it: sales of the Fiat 500 have been disappointing. But Fiat's marketing chief, Olivier Francois, says that there's a new Fiat heading to America, which could shake things up: a Fiat 500-based station wagon.

Chrysler/Fiat CEO Sergio Marchionne blames the 500's weak sales figures in part on overconfidence. As he told reporters last week, "We thought we were going to show up and just because of the fact people like gelato and pasta, people will buy it." Obviously, that didn't pan out: Marchionne had hoped to sell around 50,000 units of the Fiat 500 in the U.S. in 2011, but the final tally rang in below 20,000.

Those numbers weren't helped by a slow rollout of 500 ad campaigns. Though early orders for the 500 arrived in driveways last March, initial marketing for the model was minimal, relying on a lot of web ads and a handful of not-so-great TV commercials. The 500's full-court press, led by Jennifer Lopez, didn't arrive until midway through September.

Francois also lays some blame for the 500's sales on misrepresenting the 500 as a "chick car". Speaking to AdAge, he said, "There is now no excuse, the brand's brief was wrong, and all the responsibility lies here.... Soon we will have the sporty masculine version [the Abarth] that we missed because we were tucked into the feminine DNA of the 500."

And then there's the problem of distribution. Marchionne didn't want Fiats to be displayed on Chrysler lots, so he asked dealers to construct special Fiat showrooms. That has affected the number of Fiat outlets and the pace at which they've come online.

Francois has said that Fiat will unveil a station wagon "related" to the 500 this spring at the 2012 Geneva Motor Show. He's also said that this wagon will arrive in America at some point in 2013.

This raises some pros and cons. On the upside, a station wagon will obviously be bigger than the 500 city car, and that's likely to play well with Americans, who haven't historically been eager to shell out for smaller rides.

On the downside, it's a station wagon -- a style of vehicle that's regaining popularity in other markets, but hasn't fully proven itself here in the U.S. (Though that hasn't stopped other automakers from rolling out U.S. wagons of their own.) A wagon will also do little to boost Fiat's brand appeal among male consumers, since station wagons in the U.S. are often associated with female shoppers.

Fiat has a number of station wagons in its global family, including the New Croma and Stilo. However, both of those are a fair bit bigger than the 500. If we had to guess, we'd think the mystery wagon might be closer to an elongated Fiat Panda, which has some history with Jeep.

But what we really want to know is: would you be interested in a Fiat station wagon? Could this salvage Fiat sales in the U.S.? Or is the brand already doomed to slink out of the U.S. market again? Fiat fans and detractors, drop us a line or leave a comment in the notes below.