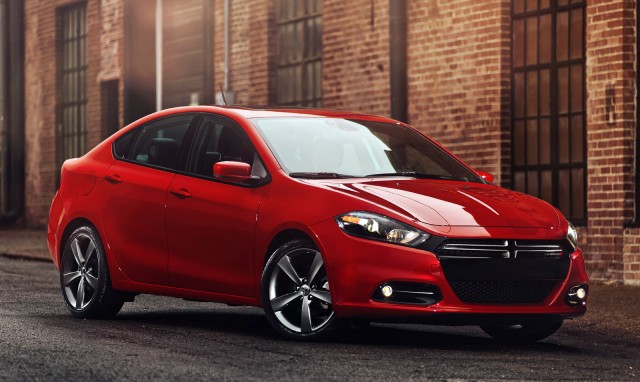 At a Detroit Auto Show press conference earlier this week, Chrysler rolled out its upcoming 2013 Dodge Dart. Set to replace the Dodge Caliber, priced starting at $15,995 (below the Caliber), and slotting right along more mainstream compact sedans like the Ford Focus, Chevrolet Cruze, Hyundai Elantra, and Honda Civic, the new Dart looks like a return to form, picking up where the Neon left off—or, perhaps more appropriately, promising us what the Neon only teased.

Small cars (like most of those we mentioned above), in addition to offering many of the tech and convenience features of larger and more expensive cars, are becoming increasingly refined. The Neon, which was loved for its perky driving feel and impressive handling, was disliked for its lack of refinement and a body structure that left lots to be desired. Likewise, the Caliber was sold short with subpar interior materials and unnecessarily noisy and coarse powertrains.

Based on what we see in the cabin of the Dart models shown at Detroit, cabin appointments appear to overcompensate for the Caliber’s woes. But with the new Tigershark engines that are standard under the hood of all Dart models (2.0-liter, or 2.4-liter in the R/T, although a Fiat 1.4T is optional) what of noise, vibration, and harshness? That’s what we asked Dart chief engineer Mike Merlo at the show this week. And if the revised Charger and Journey aren’t evidence enough, it sounds like much has changed in the way that Chrysler engineers vehicles.

Here are six reasons why the Dart will be much more refined than former Chrysler small cars—as well as, possibly, many other cars in its class:

1) A Better World (Engine). The new 2.0-liter and 2.4-liter Tigershark in-line four-cylinder engines are derived from what was formerly called the World Engine. And while they share some block architecture and other pieces, there are actually few carry-over parts, the automaker insists. “The displacement is still basically the same, but we've changed bore and stroke a bit, in an effort to improve the overall noise and vibration characteristics,” said Merlo. That also includes an all-new forged crankshaft, said Menlo, and they’ve changed the bearing locations for better stability (and less vibration).

2) Moving Exhaust Noise Away From The Driver. The most important change, perhaps, is that engineers changed the way the engine is installed and mounted; it's been rotated 180 degrees, with the intake manifold in back and exhaust in front. “By positioning the exhaust in the front side of the engine, we're really moving most of the noise away from the passenger compartment,” explained Merlo.

3) More Noise Treatment Everywhere Else. “And we’ve changed the head around dramatically, obviously, because of the front exhaust and rear intake,” said Merlo. To match the new orientation, Chrysler designed a new, long-runner intake manifolds for these engines, with various noise treatments and a bi-metal noise and heat shields for both intake and exhaust.

4) Better, Smoother Breathing. The 2.0-liter version that the 2013 Dodge Dart SE, SXT, Rallye, and Limited models will come with standard maintains the same basic DOHC arrangement that the World Engine had, but with some improvements for upcoming emissions regulations. The 2.4-liter is a different story; it’s getting an all-new cylinder head, along with a MultiAir2 version of Fiat’s variable valve timing and lift system.

“The 2.4-liter really gets bumped up in torque versus the World Engine,” said Merlo. “That MultiAir technology really allows us on a cylinder by cylinder basis to be able to vary the exhaust and intake strokes independently; so we get with a solenoid control a very fast and responsive changes in needs to both torque and throttle.”

Noise and vibration can just as well come from the intake side, Merlo pointed out, so they had to really work at that, too. “We spent a lot of time designing the intake system for this car, and we have five or six quarter and eighth-wave tuning elements that are part of the intake manifold,” he said, adding that the Dart has “a very interesting route that air flows through as it goes through the intake, meant to smooth out the sound as well as provide a very smooth flow.”

5) Top-Notch Aerodynamics. The engineering team also spent a lot of time on aerodynamics. “We have eight or nine belly pans in different locations, and they’re really helping the flow of air at the back of the car,” said Merlo. “Also, we have automatic grille shutters (they’ll be included on almost all models, though some of the lower trims will offer an aerodynamic option package), and we spent a lot of time managing air flow around the car.”

That meant completely redesigning the side mirrors, which are a big improvement. “And we laser welded the roof to the body-side apertures…That gets rid of the whole ‘ditch molding appearance’ and it yields a very smooth laminar airflow around the car,” said Merlo.

“The ceiling on this car has gone through significant evolution to the point that we have triple-lipped seals nearly everywhere,” he added. “Then we’ve looked at sound quality and closing efforts, because as you add seals you tend to set up a situation that can fight those kinds of things.”

6) The More Rigid Body Structure Helps, Too. “As you noise-isolate your intakes and your exhausts, all of those things together really help create a much smoother and free-running—and a less deflecting engine.” Merlo summed, leading to a final point: that body structure and engine structure play a huge role as well. With the Dart’s much more rigid body structure, combined with the engine changes, there’s less movement in general.

“As you get deflection, you get drag on the engine, and you get things that can create noise. So having something that's very rigid, very solid, allows the engine to turn freely and feel smoother.”

Moving from the Neon into the Caliber and World Engine, Chrysler modernized to an all-aluminum block, which often brings new vibration issues, Merlo said. “A lot of those things are lessons learned, related to the new design,”

We’ll bring you more information about the new Dart in coming months—including, we hope, a first drive sometime this spring. In the meantime, see our live gallery of the Dart at the Detroit Auto Show for another look, plus our preview of the 2013 Dodge Dart for more information.