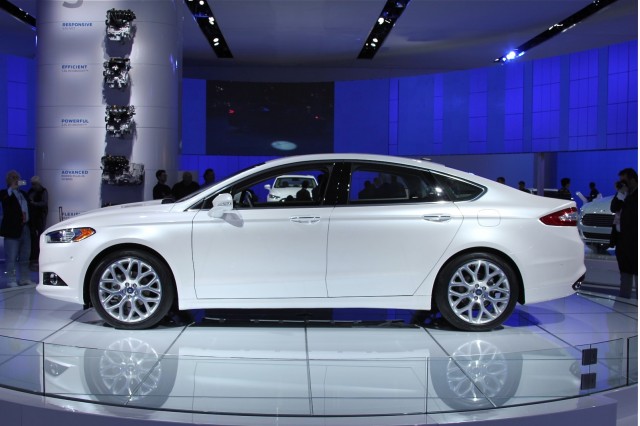 The 2012 Detroit auto show is up to speed, and one of the most important new vehicles from the show is live now on the show floor at Cobo Center.

The 2013 Ford Fusion arrives later this as the follow-up to one of Ford's biggest sales successes of the past five years. New in 2006, the Fusion is now the third most popular mid-size family sedan, trailing Nissan's Altima by a few thousand units in 2011, and further behind the leader, the Toyota Camry.

With the new Fusion, Ford's putting more muscle behind its plan to improve gas mileage across its lineup, with more efficient gas engines and with hybrid powerplants as well. The Fusion goes without a V-6 option this time around, offering a trio of gas-only engines, two of them turbocharged, the most powerful one producing 237 horsepower.

On the hybrid front, a Fusion Hybrid will hit an estimated 47/44 mpg, easily outpacing even the latest Toyota Camry, and approaching the EPA ratings of the Toyota Prius. The next step from there: a plug-in Fusion Energi with a net 185 horsepower and the ability to recharge its batteries from a 110-volt wall socket in under four hours.

The Fusion's stylish new sheetmetal pairs up with a sleek interior dominated by technology, including the improved MyFord Touch systems. Safety gear will include lane-keeping and forward-collision systems.

Stay tuned for more on the latest from Cobo Center, and follow TCC for an in-depth preview of the 2013 Ford Fusion--and keep in touch with us on Facebook and Twitter.