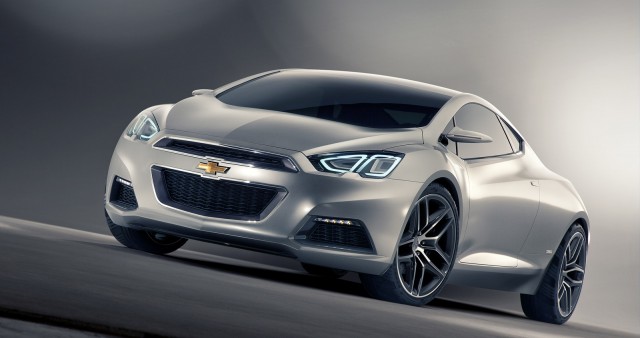 What do young shoppers want to see in a next car? The answers you get from one American 20-something to another may be almost polar opposite. And Chevrolet’s two small-car concepts shown at Detroit show reflect those varied expectations. Displaying the boxy, upright Code 130R next to its counterpart, the Tru 140S, is truly a yin-yang moment, even for those who know nothing about design.

The more organic, curvaceous, and rakish design of the two is the Tru 140S, a three-door coupe that’s somewhat reminiscent of the Hyundai Veloster and also aims to be “an attractive-yet-affordable sports car.” Appearing in matte-white with chrome wheels and crossflag Chevy emblems, it’s conceived as a sort of ‘mini exotic’ in design.

The front-wheel-drive 140S is based on the Chevrolet Cruze platform. It includes direct injection and engine start-stop, along with a 1.4-liter Turbo Ecotec four-cylinder engine, for a fuel-economy rating of about 40 mpg.

Just as with the companion Code 130R Concept, the 140S is also intended as a budget-priced entry, starting in the low $20,000s range.

Be sure to also read about GM’s other Chevrolet concept, the Code 130R. And to understand where these might fit into the automaker’s future, see our story on how Chevy hopes to take aim at a new generation of global small-car shoppers with these two concepts.