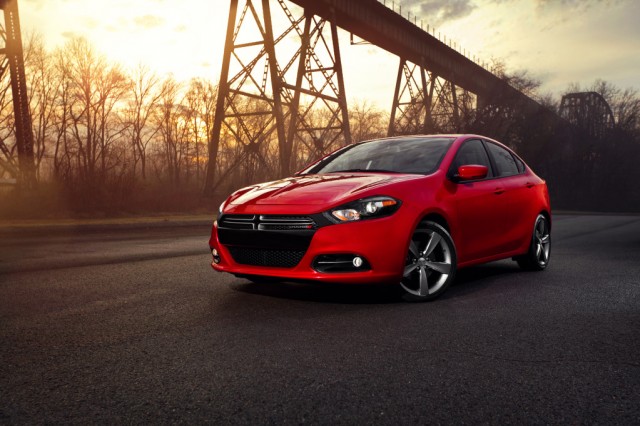 Although we’re still holding out for the official debut of Dodge’s new compact sedan, the 2013 Dodge Dart, it’s broken cover.

As we can see in the video below, as well as in these early-release pictures—altogether, the first to show a full view of the new model—the Dart looks less like a successor to the never-fully-realized Caliber compact, and more like a generation-removed replacement for the Dodge Neon.

While we don’t have exact specs to give you yet, we expect the new Dart to ring in a half-size larger, however, in the same range as the Chevrolet Cruze and Ford Focus, if not a bit larger. With taillights that go full-width, as well as an aggressive-looking front end with blacked-out detailing (combines with a nicely detailed but softer headlight shape) we can’t help but see the likeness to the larger Charger sedan—as well as the Neon again.

Expect three different engines in the Dart lineup: a base 2.0-liter four-cylinder, tagged Tigershark; a 1.4-liter turbocharged four that’s essentially the same engine as in the Fiat 500 in the middle of the lineup; and at the top of the line, a 2.4-liter four. With those engines come three different transmission possibilities: a six-speed manual, a six-speed automatic, or a six-speed dual-clutch automated manual gearbox.

Chrysler has already revealed that the Dart, which is based on the European-market Alfa-Romeo Giulietta, but built in Belvidere, Illinois, will have more high-strength steel (68 percent) than most other vehicles in this class, which helps save weight and provide a strong basis for dynamic tuning and for helping seal out noise and vibration. At the same time, safety will be a priority; Chrysler has promised a total of ten airbags, and Rear Cross Path Detection will be available.

As we reported last month, the Dart will have a class-exclusive UConnect Touch touch-screen system front and center, as well as a reconfigurable TFT instrument cluster just ahead of the driver—all with ‘racetrack’ lighting outlining the two display areas. Functions on offer through the system will include live traffic and weather for the nav system, and the gauge display will offer a choice of several layouts.

Overall, the Dart runs counter to some trends we’ve seen from automakers like Hyundai—in that it will be offered in more build combinations, and with an even greater level of customizability. The 2013 Dart will be available in 12 exterior colors, 14 interior color and trim combinations, and six wheel-design options—in addition to the three engines, three transmissions, and hundreds of Mopar customization options.

Watch the video, browse the pictures, and stay tuned, as we’ll have a lot more live from the Detroit auto show.