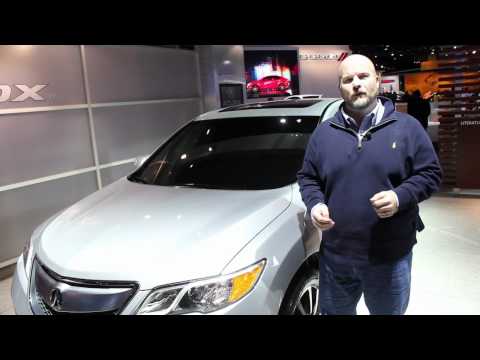 With the launch of the 2012 CR-V crossover underway, Honda's now prepping its alter ego for its own date with showrooms.

The 2013 Acura RDX is expected to go into production early this year, but Honda showed a prototype of the new compact luxury crossover at the 2012 Detroit auto show along with its other upcoming vehicles, including the ILX compact sedan and a concept version of the reborn NSX sportscar due in 2015.

At first glance, the RDX runs counter to Honda's make-it-greener marching orders. While the CR-V soldiers on with a four-cylinder engine, the RDX leaves its old turbo four behind and adopts a new 273-horsepower, 3.5-liter V-6 engine. That puts it more squarely competitive with the Toyota RAV4, while other new crossovers like the upcoming Ford Escape turn to smaller fours and turbocharging in the quest for higher gas mileage. Honda says a six-speed automatic and a lighter, more efficient all-wheel-drive system will keep it competitive on the fuel-economy front: it estimates the front-drive RDX at 20/28 mpg, which it says will be the best ratings for any gas-powered, compact-sized, luxury crossover. It's also an increase over the 2012 RDX's 19/24 mpg.

The RDX's handsome sheetmetal looks like a big improvement over the prior car's plain styling. More upgrades await drivers inside, Honda says, especially in quietness, where the RDX gets active noise cancellation to mute the cockpit.

Electric power steering and a new suspension arrive are part of the package, as is more interior room with an expanded cargo space, bigger door openings and a power tailgate.

And to boost its luxury standing, the RDX gets streaming audio capability, text messaging (voice-to-text or text-to-voice, Acura hasn't specified), pushbutton start, and a triple-view rearview camera. Stepping up to the Technology Package adds on real-time traffic and weather, telematics services, and a navigation system with a 60GB hard drive, of which 15GB is partitioned off for music storage.

The RDX will be built in Ohio, and Honda says it expects top crash ratings for the new crossover.

Stay in touch with our coverage of the 2012 Detroit auto show by bookmarking Motor Authority's show coverage page.