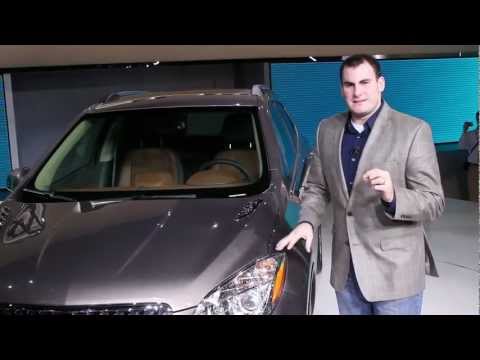 Buick is quickly expanding its lineup, what with the Regal and new Verano, but it needs an encore to the Enclave. And that is exactly what it is naming its new compact crossover, the 2013 Encore.

The new Encore's contemporary styling won't offend anyone. Up front, there's a dark-gray waterfall grille flanked by projector beam headlights that incorporate a blue ring similar in style to the Enclave. And now that we can fully see the Encore, the small vents below the headlights do not look as odd as they did in the teaser images.

The front air dam features painted lower panels and Buick's signature portholes. The side mirrors are mounted on the doors, in an effort to help with aerodynamics for better fuel efficiency. A soft character line runs down the sides and flows into the wrap-around taillights. The wheel wells are filled with standard five-spoke 18-inch painted alloy wheels with seven-spoke chrome wheels as an option.

Inside the Encore has a terrific looking dashboard that flows into the door panels. A top the instrument panel sits a standard seven-inch color LCD display that works with the available navigation system and Buick's IntelliLink voice-activated system, which will be standard. Below the screen is a closely clustered array of buttons, similar in fashion to that of the new Verano sedan.

Three color combinations will be offered inside the Encore to compliment the ice-blue accent lighting. The seats come trimmed in either contemporary cloth or leatherette, with leather as an available option. Remote vehicle start, dual-zone climate control, and rain-sensing windshield wipers are among the standard and available options.

Buick's QuietTuning is standard on the Encore including the acoustically treated headliner, sound deadening in the cabin, under the hood, and in the wheel-well liners, all of which, with other details, add to a very quite ride. To add to the refinement is Buick's new Active QuietTuning feature (active noise cancellation), in which ceiling mounted microphones which can detect noise patterns (road noise, for instance) and counter them through the audio systems speakers and subwoofer.

The Encore will be available in front and all-wheel drive, and will be powered by a 1.4-liter turbo four-cylinder rated at 140 horsepower and 148 pound-feet of torque. Power is handled by a six-speed automatic which features both a steep first gear and tall overdrive gear. Combined, these two features help with acceleration and overall fuel economy, though fuel economy ratings have not yet been released.

Stay tuned for more information and pricing as it becomes available. And make sure to follow all the news from the 2012 Detroit Auto Show by visiting our dedicated show page.