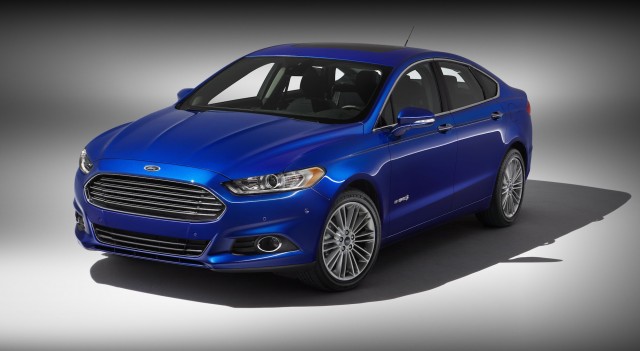 It's unusual for a car to sell better at the end of its life, but that's the situation Ford has on its hands with today's Fusion four-door. Last year, the company sold nearly 250,000 Fusion sedans, putting it ahead of the Honda Accord on the annual family-car sales charts.

Even though it's still selling strongly, a replacement is in the works in the form of the 2013 Ford Fusion, introduced to the world at the 2012 Detroit auto show. Like some other competitors, the Fusion's dropping all V-6 engines from its lineup, and instead adding a pair of greener sedans to please hybrid and plug-in-hybrid fans.

Last year, Ford previewed the new Fusion's looks in the form of the Ford Evos Concept, which it put on the stand at the Frankfurt Auto Show last September. With a face that's described as a new look coming to the whole Ford family, the roofline has other inspirations--we see a lot of the Audi A7 in the profile. The cabin moves forward the themes from the Focus and Fiesta, grouping major controls in a vertical stack framed in metallic trim. It's a strongly European look that puts a priority on easy-to-read gauges and displays.

The current V-6 engines dropped, the Fusion will turn to turbocharging to boost four-cylinders to competitive power levels. Like the Hyundai Sonata before it, and the Chevy Malibu coming to showrooms soon, the Fusion's four-cylinder play allows engineers to slim down the car's curb weight and crash structures.

Three four-cylinder engines will be offered on the gas-only Fusion, the base being a carryover 170-horsepower, 2.5-liter four. A turbocharged 1.6-liter four will make 179 horsepower, while a 2.0-liter turbo (a version of the one coming in the Focus ST, and found already in the Range Rover Evoque) will make 237 hp. All will offer a six-speed automatic, with a six-speed manual available on the 1.6-liter car. All-wheel drive will be available, but only on the 2.0-liter version.

Ford says fuel economy estimates are higher across the board. The 1.6-liter checks in at 26/37 mpg, with the help of a standard stop-start system. The 2.0-liter model is projected at 23/33 mpg; Ford hasn't estimated mileage for the base drivetrain, likely to be a fleet special.

The Fusion's trump cards could well be a pair of hybrid models. The "standard" hybrid model gets higher gas mileage and more EV range this time around: Ford says it can run on batteries alone up to 62 mph, up from 47 mph in the 2012 Fusion Hybrid. Gas mileage is estimated at 47/44 mpg, well above today's 41/36 mpg; at 46 mpg combined, it should top the 2012 Toyota Camry Hybrid (41 mpg) and the Hyundai Sonata Hybrid (37 mpg). Ford has left much of the hybrid's specifications hidden, saying only that the system's net horsepower is approximately 185 hp.

New to the lineup will be a plug-in hybrid model, the Energi. Like the C-Max Energi hatchback coming in 2013, this Fusion model gets a larger lithium-ion battery pack, a 3.3-kilowatt charger, and an external door for the charging port. Ford also declines to detail this powertrain's battery energy, or the Energi's EV-only range. However, it says the combined gasoline and electric efficiency rating will be more than 100 MPGe--13 MPGe or better than the plug-in Prius, and 8 MPGe or better than the 2012 Chevrolet Volt.

The story isn't entirely an appeal to green drivers, though. With the new Fusion, Ford hopes it can keep and strengthen the Fusion's reputation for good handling and packaging. The company says the 2013 sedan will have the handling, roadholding, and driving character of its latest smaller cars, particularly in well-tuned electric steering. Active noise canceling will be fitted to Hybrid and Energi models, to make the vehicle even more quiet in electric-only mode.

Interior space is competitive with today's car, but the 2013 Fusion doesn't make breakthroughs on rear-seat space. Total interior volume is 118.1 cubic feet, and both the front and rear seats are spacious enough to seat four adults comfortably. Rear-seat headroom is compromised a bit by the swoopy roofline. Trunk space is cut down a bit too, to 15.4 cubic feet from today's 16.5 cubic feet.

The 2013 Fusion has eight airbags standard--front, side, and knee bags for front-seat passengers, and side curtains that cover the entire window opening front and rear--for all four outboard passengers. Ford is aiming for five-star safety ratings.

Adaptive cruise control is available, as is a new driver-alertness monitoring system that will startle the driver and flash a cup-of-coffee icon if it senses the driver's attention and altertness waning. Ford's blind-spot information system makes a return. New features include Active Park Assist (which parallel parks the car into a space it senses, operating the steering while the driver accelerates and brakes) and a combination of Lane Departure Warning and Lane Keeping Assist. Finally, all Fusions get Hill Start Assist.

The well-received Sync system is standard, with an updated version of MyFordTouch optional, with clearer, less cluttered screen designs.

Ford says the 2013 Fusion and Fusion Hybrid will arrive at dealerships this fall, with the Fusion Energi model to follow "a bit later".--with John Voelcker