4 Apps For New Year's Eve That Aren't About Dodging DUIs 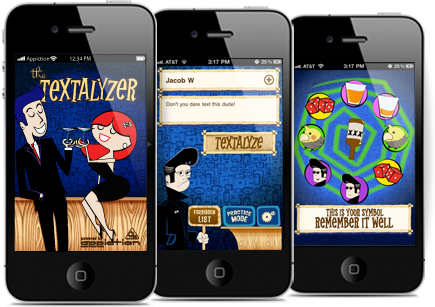 Okay, here's what we know:

2. You will probably be celebrating.

4. Because you're the clever sort of person who thinks ahead, you've already made plans to ditch your car or keep a designated driver on hand.

5. As a result, you have no need of drunk-driving apps (which aren't especially reliable) or DUI checkpoint apps (which you shouldn't be using in the first place).

6. However, you still need something to keep you occupied during that lull in the party that should begin around 12:01 Sunday morning.

Keeping all that in mind, here are four apps to ease you through the holiday festivities.

Liquor Run Mobile: Free for Android and iPhone
If you find yourself in unfamiliar territory this New Year's Eve -- as many of you will -- you may wonder where to go when the liquor supplies run thin. Liquor Run Mobile maintains a database of over 40,000 liquor stores: just let the app access your location, and it will direct you to the nearest wine shop/package store/drive-through daiquiri stand and give you a heads-up on its hours of operation. You can also find cocktail recipes, and if you're watching your waistline (which we don't recommend on a holiday weekend, but it's your life), Liquor Run Mobile will give you calorie counts for popular drinks. Even better, the "Safe Ride" feature lets you plan for a safe drive home after you've been nipping at the hooch.

DrunkBlocker: Free for Android
Textalyzer: $0.99 for iPhone
When some people get a little crunked up, they have a nasty habit of pulling out their phones and drunk-dialing or drunk-texting the people they love/hate. This can cause pain, suffering, embarrassment, and, if you accidentally get your boss on the line, it can even cost you a job. DrunkBlocker and Textalyzer help you keep your drunken, forlorn state all to yourself by preventing you from contacting old flames, co-workers, family, and/or friends.

There are a couple of drawbacks, though. DrunkBlocker works only on calls, and Textalyzer works on only on text messages. Also, you have to set up these apps before you head out for the night, alerting them to the fact that you shouldn't be allowed to call/text this person or that one. And because they're on opposing operating systems, you can't have both apps on the same phone. (Alas, we haven't found one app that works well for both calls and texts.)

Still, if you know you have a tendency to contact folks while you're deep in your cups, there are worse apps you could own. And Textalyzer adds some gamification to the mix, which is kind of fun. Check the video at the bottom of the post to see that app in action.

Times Square Official New Year's Eve Ball app: Free for Android and iPhone
Maybe we've been wrong about you. Maybe you're going to stick close to home on New Year's Eve because you can't be bothered with all the crowds, or because you have to work the next day, or because you have an irrational fear of confetti. No problem: you can still enjoy the fun with this little app. Granted, you'll be celebrating New Year's in Eastern Time, so if you live outside that time zone, it may feel a little weird -- but probably no weirder than you'd feel if you'd actually gone to your neighbor's house and chugged down five flutes of Andre.

Wherever you go, whatever you do, we hope you have a happy, safe holiday. We'll see you back here next week, when we'll be gearing up for the 2012 Detroit Auto Show.

Now, here's that video demo of Textalyzer we told you about. Enjoy: