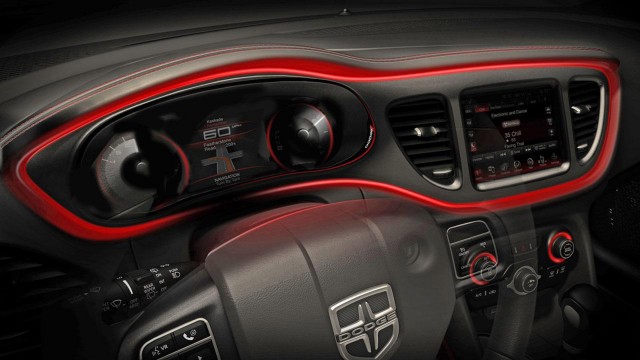 The Dodge Dart is back. Well, almost; next year, Dodge will resurrect the Dart model name in an all-new compact sedan set to replace the unlovely Caliber hatchback. And from the couple of pictures that Dodge had already revealed, we knew that this new model—a compact sedan aimed at mainstream offerings like the Ford Focus, Chevrolet Cruze, Hyundai Elantra, and Honda Civic, among many others—will bear plenty of bold cues borrowed or evolved from the larger Dodge Charger sedan.

Now Chrysler has released two more teaser images of the interior. Although they’re detail shots, they reveal a lot about how technologically advanced and design-savvy the 2013 Dodge Dart cabin will be.

A class-exclusive ‘floating island bezel’—what appears to be border (with available ‘racetrack’ light piping) around driver-oriented displays, is referred to as the “the high-tech centerpiece” of the new 2013 Dart. It outlines both a TFT (thin film transistor) customizable gauge cluster and a class-exclusive UConnect Touch touch-screen multimedia center. The touch screen is the largest in the Dart’s class, while the TFT is an exclusive in its segment, Chrysler says, and a closer look at the picture provided shows the system providing advanced features such as tagging and favorites, as well as live traffic and weather for the nav system. Meanwhile, the picture of the gauge cluster itself shows simulated analog gauges, and a (likely user-configurable) center area showing, for instance, route information. 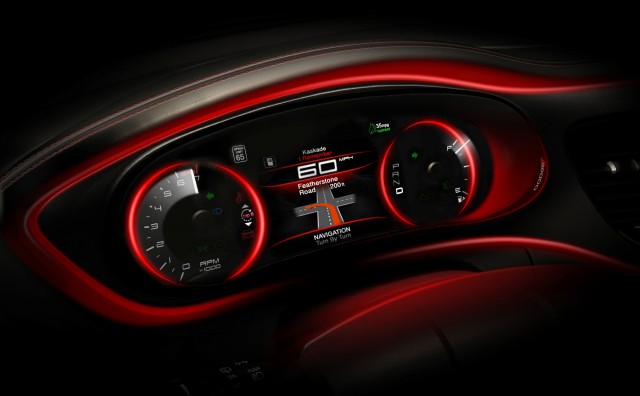 We’ve come to expect innovative interior-packaging features from Chrysler—the current Caliber’s integrated rechargeable flashlight and chilled glovebox are a couple of features that come to mind—and the Dart isn’t looking like any exception in this respect. Dodge says that the Dart’s center console has multiple auxiliary jacks; the glovebox is sized to fit an iPad; and console map pockets can accommodate mobile phones.

Also of interest is that the 2013 Dodge Dart will come with ten standard airbags and a new foundation with 68 percent high-strength steel. Blind-spot monitoring and Rear Cross Path Detection will also be available.

A la carte, not value menu

In a philosophy that runs fully counter to some other automakers—Hyundai, and its seven build combinations for its redesigned Elantra, for instance—customization was one of the central ideas through development of Dodge’s new compact sedan. The 2013 Dart will be offered in 14 interior color and trim combinations, 12 exterior colors, six wheel-design options, three engines, and three transmissions. In addition to that, there will be hundreds of options and combinations offered through Mopar.

Dodge also promises soft-touch materials throughout, along with hand-sculpted shapes; and from what's now a set of four teaser pictures, the Dart looks like it might prove to be a design standout.

Check back, because it’s quite likely we’ll get either a more juicy tidbits or a better glimpse of the new Dart’s bodywork before its official debut January 9 at the Detroit auto show.