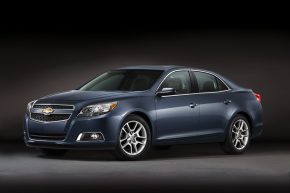 Let’s say you want to drive three carpooling co-workers to and from the office on a regular basis, so you want a comfortable sedan that delivers good fuel economy. You’re not partial to hybrids, simply because they tend to cost more than their gasoline-only equivalents.

Now throw in your penchant for buying American, and we’re happy to report that your chariot has arrived in the form of the 2013 Chevy Malibu Eco. The price of admission has been announced--and it starts at $25,995, including a $760 destination charge (but excluding any options).

Chevy says its Malibu Eco will deliver a lot of value for the money. First and foremost, the car uses GM’s eAssist mild hybrid system to help deliver a rated fuel economy of 26 mpg city and 38 mpg highway, which is better highway fuel economy than the $29,395 Ford Fusion Hybrid--though it's still 15 mpg shy of the Fusion Hybrid's stellar 41-mpg EPA city rating.

Under the hood is an Ecotec 2.4-liter four-cylinder engine, mated to a six-speed automatic transmission and equipped with eAssist. The eAssist system provides supplemental power (thus reducing fuel consumption) via an electric motor that doubles as a generator. Motor power comes from lithium-ion batteries, which are partially recharged via regenerative braking.

It’s packed with other fuel-saving technology, too, such as a start-stop system with an indicator on the tachometer, low-rolling-resistance Goodyear tires and an aero shutter system that improves fuel economy by reducing drag at high speeds. It’s built to be lighter as well, and uses an aluminum hood, aluminum rear bumper beam and low-mass carpeting--and it's noticeably shorter than the last Malibu, too.

Inside, the Malibu Eco includes Chevy’s new MyLink connectivity system, which allows drivers to stream Pandora internet radio and catch up with podcasts on Stitcher. If safety is a concern, the new Malibu comes with eight standard airbags, ultra-high-strength steel construction, OnStar and even a rearview camera system.

Chevy says the new Malibu benefits from a roomier “dual cockpit” interior, built with higher quality material than earlier Malibus. They tell us that the ride and handling are “European-influenced,” which should appeal to those who see driving as more than just a chore.

Four option packages are available as well, allowing buyers to build a Malibu Eco that fits both their needs and their budgets. Look for cars to hit Chevy dealer inventory in the first quarter of next year.