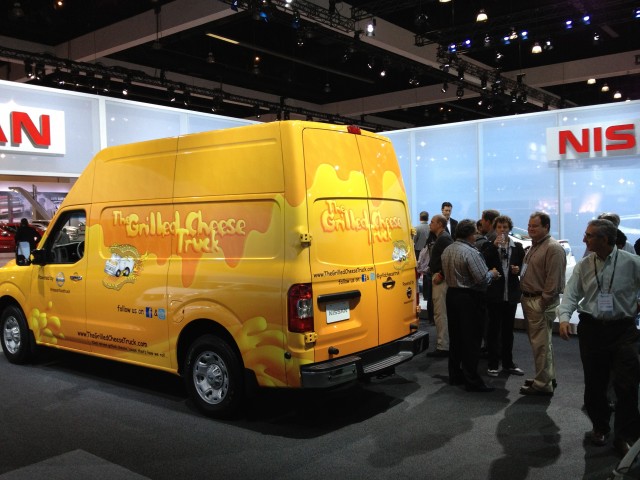 We've just gotten back from the Los Angeles Auto Show, and while we could sit here and tell you all about the new 2013 Ford Mustang Shelby GT500, or the new 2013 Cadillac XTS, we aren't going to. No, in fact we are going to tell you about how Nissan snagged some extra attention by feeding hungry automotive journalists in LA.

During press days at the Los Angeles Auto Show, Nissan featured two NV food trucks at its stand. In an effort to break into the food truck market, Nissan wanted to show journalists that the Ford Transit Connect isn't the only player in town. Did Nissan accomplish its mission? While we aren't sure how many journalists wrote about the food trucks, you can bet your shiny dollar that many hungry journalists flocked to the Nissan booth for grilled cheese and gourmet ice cream sandwiches.

The two food trucks featured at the show were the Coolhaus truck, which handed out the gourmet ice cream sandwiches, and The Grilled Cheese Truck, which, you guessed it, handed out grilled cheese sandwiches. Oh, and both of these were delicious, we taste tasted to ensure quality.

While we thank Nissan for the delicious free food, we think the larger message is about how flexible the new NV vans truly are. Recently it was named the next taxicab of New York City, and this week's excursion into food truck territory worked out well, too. The question now is how widely Nissan's Jack of all trades will be adopted, but dispensing tasty morsels certainly won't hurt.