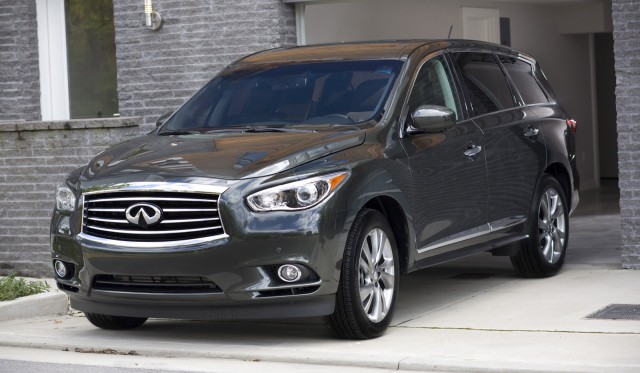 The 2013 Infiniti JX will be priced from $41,300 when it arrives in showrooms next spring.

Infiniti released pricing and details on its first seven-seat crossover at the 2011 Los Angeles auto show, promising that the JX would "shake up the status quo" that currently counts the Acura MDX, Audi Q7 and the Lincoln MKT as some of its flashier competition.

The JX comes from the same roots as the Tennessee-built Nissan Murano, and will share its assembly line, but the look is completely its own. The JX's most jazzy styling cues erupt from its grille and its rear pillars, which carry over the Z-shaped motif from the fabulous Essence concept. They're applied to a body that's far more traditional, though, than Infiniti's stubby EX and FX crossovers. The interior has chrome trim and the usual exotic assortment of Infiniti colors and finishes, one a "washi" wood with a silky texture, or a more traditional maple.

Power comes from a 3.5-liter V-6 with 265 horsepower and a continuously variable transmission (CVT), like the unit found in the Murano. It's Infiniti's first application of the CVT, and in the Murano it's as refined as any we've driven. Here it's also been paired with electronic controls to modulate performance in four modes (normal, eco, sport and snow). The suspension's independent, with struts in front and a multi-link rear end. All-wheel drive is an option; four-wheel disc brakes are standard along with 18-inch wheels and tires, while 20-inchers are an option. 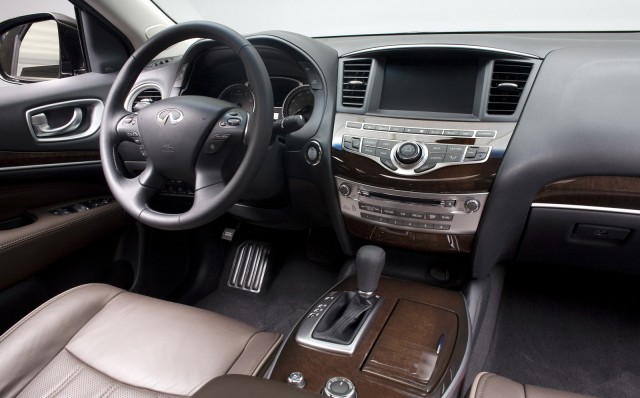 The JX's larger-than-Murano interior has seven seats split among three rows. The middle row slides on rails over a span of 5.5 inches for flexible leg room, while Infiniti promises more leg room in the second and third rows than a Cadillac Escalade. Longer rear doors mean third-row passengers can climb into the way-back without having to tilt the second-row seat forward. Also on the spec sheet: better cargo space than any crossover in its niche, once the third row is folded away and the second row moved forward.

Safety features include a 360-degree around-car camera with the same degree of blind-spot monitoring. There's also a new system that intervenes with braking if an imminent collision with an obstacle to the rear of the vehicle is detected. Lane-departure warning and counter-steering systems are also available. Infiniti's tire-pressure monitors beep the horn when a tire is low on air.

Pricing starts from $41,300 for the base JX, including $850 in destination charges, while the all-wheel-drive model starts $1100 higher.

For more on the production and concept cars making their debut this year, turn to MotorAuthority's coverage of the 2011 Los Angeles Auto Show.