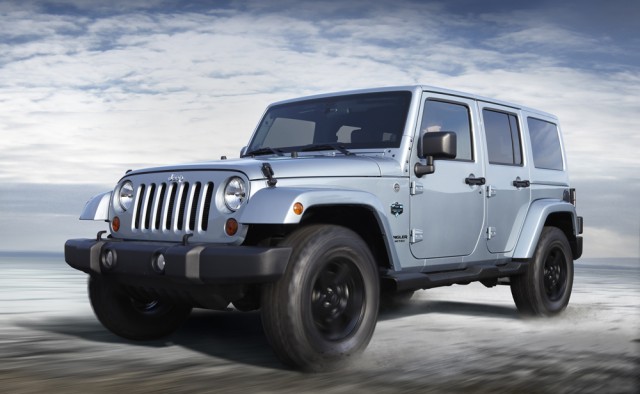 If you were planning to treat yourself (or someone else) to a Jeep this holiday season, you now have two more options to consider: the 2012 Jeep Wrangler Arctic and the 2012 Jeep Liberty Arctic. Both arrive in showrooms this month.

As you might imagine, the Arctic editions allude to the extreme weather conditions north of the Arctic Circle and to the rugged individuals who live there. According to Mike Manley, Jeep's president and CEO, "There are few environments more grueling and demanding than the arctic [sic], which is just the type of terrain legendary Jeep vehicles are engineered to conquer."

Like most special editions, the bulk of the Arctic-model upgrades are cosmetic. Sporting a body based on the much warmer-themed Jeep Wrangler Sahara, the 2012 Jeep Wrangler Arctic comes in three colors -- Bright Silver, Bright White, and the special Winter Chill -- with a hardtop and fender flares to match. Shoppers will also find "Arctic" badges on the front fenders, a "Yeti Footprint" decal covering a portion of the driver's side fender and hood, as well as other Arctic-themed goodies.

Inside, the upholstery comes with Polar White accents, plus some snazzy orange piping, orange door trim and nets, and accent stitching throughout. There are "Arctic" logos on the front seats -- which are heated of course, as befits the theme. The Wrangler Arctic also comes with a Rubicon tire and wheel package, including 17-inch wheels and 32-inch tires.

The 2012 Jeep Liberty Arctic shares many of the features found in the Wrangler version. The Liberty is available in one additional exterior color -- Mineral Gray -- and it comes with its own unique "Arctic" decal on the hood. The Liberty rolls on 16-inch aluminium wheels, shod with P235/70R16 OWL all-terrain tires.

On the inside, the Liberty Arctic looks a great deal like the Wrangler, though given the Liberty's more family-friendly nature, shoppers will find a Media Center 430 touch-screen on the center stack, attached to a nine-speaker Infiniti sound system.

The Jeep Arctic models are just the latest in a slew of special-edition Jeeps -- the most recent being the Call of Duty: Modern Warfare 3 edition that we previewed in September. For additional details, see your Jeep dealer, or check out the full press release at Chrysler.com.